The tobacco economists network - or how the Tobacco Institute recruited over 100 American economics professors. Part 2 of many


1. Over one hundred economists, led by core group

The economist network was set up by Robert D. Tollison of GeorgeMason University with the help of lobbyist/consultant James M. Savarese. Over time some 120 economists were active in the network although not all of them participated equally, nor did they all receive the same amount of funding for their lobbying.

The industry constantly evaluated the economists (see further). A core group was created in 1988 and it helped further refining the lobbying strategy:

A social cost committee of seven economists headed  y Jim Savarese and Bob Tollison is being formed. Others in the economist network may play a role researching and writing on this issue. However, this core group will create strategies and structure for a social cost program. The group will have its first meeting to begin implementing a strategy on February 1-2 in Washington.

With the exception of Ebel, this core group would be responsible for running the network. In another 1988 document, James Savarese lists the core group, this time without Ebel, who does not reappear in the files, so he must have dropped out early.

The tobacco industry wanted to recruit at least one economist per American state (we'll explain why). During the existence of the network, over 100 American economics professors were involved. The industry called those shown below the ‘core group’. They all worked closely with the Tobacco Institute

We'll explore the activities of the economist during the next year or so, but it is clear the industry had a clear vision how to you use the economists:


In the next number of posts, we will see the industry did not just hire the economists, but always evaluated them for effectiveness 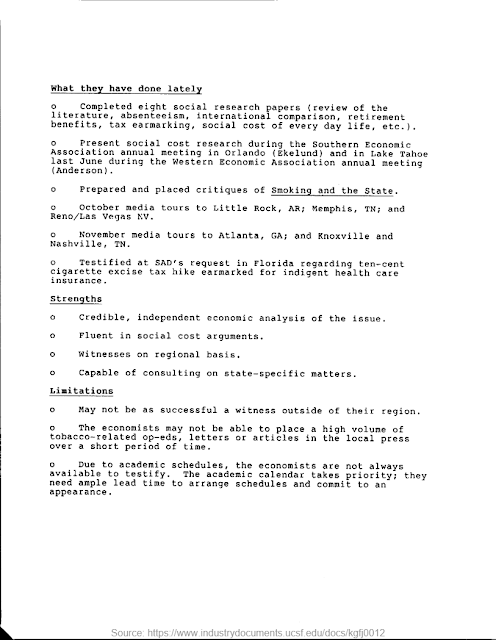 The tobacco economists network - or how the Tobacco Institute recruited over 100 American economics professors. Part 1 of many.

This is story of the 100+ American free-market economists recruited by the tobacco industry. It was written in 2014-2015 but due to circumstances never finished. The story is too important to ignoreso I'm presenting the draft written back then. Feedback / new insights welcome.

The tobacco industry used a series of scientists in so-called ‘truth squads’ to deny the harmfulness of second-hand smoking.

Lesser known is how the industry handed out millions of dollars to a secret network of over 100 American economics professors, known as the "economists network".

The aim of the network was preventing the government imposing higher excise taxes on tobacco to cover social costs related to smoking. The economists were hired to spread economic doubt on the effectiveness of social cost related actions by the government.

This series of blogposts will prove that the economists were :

-     Targeting the media in well organized op-ed campaigns.
All op-eds had to be cleared by the tobacco industry's lawyers before publication
The economists earned up to $3,000 per op-ed they managed to get published in newspapers

-     Testifying at political hearings
The economists earned up to $10.000 per hearing
Some economists defended arguments they knew were flawed

-     Producing pro-tobacco books
Robert D. Tollison and Richard E. Wagner wrote/edited at least 5 pro-tobacco books
The books were promoted by well organized media-tours funded by the industry all over the USA.
The authors received media training organized by the tobacco lobby on how to deal with tricky questions
Positive book review were sent to newspapers by other members of the network

The economists consistently "forgot" to mention they were being paid by the Tobacco Institute or tobacco companies.

While many of the individual points discussed below are known in isolation this paper tries to provide a complete and much needed overview of the activities of the network.  It expands on the partial overview provided by Anne Landman, Daniel K. Cortese and Stanton Glantz in their paper Tobacco industry sociological programs toinfluence public beliefs about smoking

Just like any other industry, the tobacco industry wants to make a profit, therefore it wants the public to smoke. It is as simple as that. Government decisions that may result in lower profits are regarded as unwanted and will be attacked.

The Tobacco Institute, Inc. was a trade group founded in 1958 by the American tobacco industry and that employed around 70 lobbyists. It was dissolved as part of the Tobacco Master Settlement Agreement because many of its activities were illegal. As a part of the settlement, the Tobacco Institute's internal documents have been placed online in the Legacy Tobacco Documents Libraryhttps://www.industrydocuments.ucsf.edu/tobacco/.

Since the 1970's, federal, state and local American governments have been imposing more and more excise taxes on tobacco products. The industry was not very pleased.  Regional Philip Morris director Page H. Sutherland wrote in 1977

If North Carolina increases the state cigarette tax above the present level, it would surely precipitate a domino effect around the country, causing most state tax rates to go up at least a proportionate amount. This could well cause a resultant decline in domestic sales

A 1979 report by the US Surgeon General concluded passive smoke, or Environmental Tobacco Smoke (ETS) exposure should be considered aseparate scientific issue from active smoking. In January 1993, the US Environmental Protection Agency (EPA) released the report Respiratory Health Effects of PassiveSmoking: Lung Cancer and Other Disorders attributing at least 3.000 annual US lung-cancer deaths to ETS exposure

The negative health effects of tobacco have been known since the 1950's. With some delay the public also became aware that smoking kills and later the public became aware that smoking is not just harmful for the smoker but also for those in the smoker's environment. In 1978, the Roper Organization Inc.'s survey on public attitudes on environmental tobacco smoke noticed

Nearly six out of ten believe that smoking is hazardous to the non-smoker's health, up sharply over the last four years. More than two-thirds of non-smokers believe it, nearly half of all smokers believe it. This we see as the most dangerous development to the viability of the tobacco industry that has yet occurred

ETS caused a serious problem for the industry, because harm to nearby non-smokers incents governments to take action against smoking in public places. William Murray (vice chairman of the board of Philip Morris) called ETS the single most important challenge we currently face because Murray realized that

ETS is the driving force behind smoking restrictions in the workplace, on airlines and other forms of public transportation, and in virtually all areas offering public access. If present trends continue, smokers will have fewer and fewer opportunities to enjoy a cigarette. This will have a very direct and major impact on consumption

Smoking bans are the biggest challenge we have ever faced. Quit rate goes from 5% to 21% when smokers work in non-smoking environments

ETS leads to smoking related illnesses by non-smokers, adding to the economic losses because smokers themselves are ill more often, with more absenteeism at work and higher health care costs. It is possible to put a price tag on these costs, so called social (economic) costs.

Anti-smoking groups used social cost as an additional argument to call for more tobacco regulations. The issue put the tobacco industry under a great deal of stress: if smoking causes a loss for an entire society, a loss that can be calculated in hard dollars, it will be an incentive for regulations, taxes to compensate those costs, or even smoking bans.

This paper explores the industry's answer to the social cost problem, creation of a refined lobbying strategy to halt new regulations and taxes.

The tobacco industry set up a clandestine network of free market economists who claimed to be independent academics workings on the economics of social coast and tax-issues. In reality they were being organized and paid by the tobacco industry.

In the next blogpost we'll first explore *why" the tobacco industry set up an economists network.
Geplaatst door jules op 00:50 No comments:

In the next year (or so), I'll explore the network of 100+ American economists professors recruited by the Tobacco Industry

This posts lists all the different posts:
Tobaaco industry vs the social cost issue
Setting up a network
Activities of the economists network

Email ThisBlogThis!Share to TwitterShare to FacebookShare to Pinterest
Labels: economists network, James M. Savarese, Robert D. Tollison, social cost, Tobacco Institute
Newer Posts Older Posts Home
Subscribe to: Posts (Atom)
"The target audience of denialism is the lay audience, not scientists. It's made up to look like science, but it's PR." David Archer