The Tobacco Institute wanted economists to testify for legislators to create the illusion that "the academic world" opposed excise taxes on cigarettes. The August 1986 Field staff evaluation of resources explains why the industry used this form of lobbying

The industry taught the economists how to communicate and frame their message.

As the next blogposts will show, one can question the legitimacy of the testimony, as not all economists were always defending material they wrote, or even believed. At least 27 members of the network participated in hearings

The TI Excise plan is from 1984, and already in the same year the first economists testified. It is not certain how the industry persuaded them, and setting up the 'official' network seems to date from 1985.

The PR-firm Ogilvy and Mather reported

This makes clear the academics worked under a well defined strategy, even though at that point they may not have been aware of this. The Tobacco Institute wrote

Actually this summarizes the entire activities of the network. Even though in the next chapters there are further examples raising questions about the honesty of some network members, it is likely most of the economists never said anything they did not believe.  They were paid to say what they would have said anyway, as they were libertarians opposing any form of taxation in any case.

The problems with the network were:
This may not seem much of a problem, as the economists might have said the same if they were not paid.

Ogilvy and Mather's annual report shows the PR-firm identified public smoking and creating doubt as the most important instruments in lobbying. Other LTDL documents show manufacturing doubt on health risks always was the industry's main focus.

The program around taxes emerged as the second most important issue. That's where the economists come into play 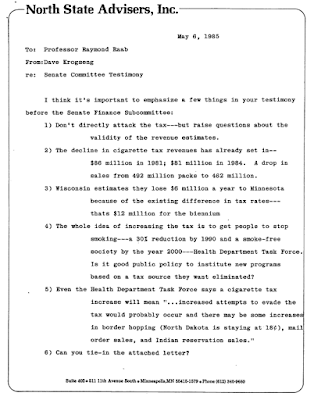 This letter clearly illustrates the economists were not expressing their personal views but were acting as lobbyists.

During the years to follow, the economists testified at many hearings, often local ones. This was the main reason the TI wanted to recruit an economist in every state, so politicians would not have the feeling some 'corporate scientists' were flown in from some far away metropolis.

Of course the testimonials were not the work of independent academics: the industry was aware in advance of the testimonials’ content. In 1985 Tollison forwarded Thomas Borcherding's draftstatement to the Tobacco Institute after the hearing, but the industry also knew what would've been said in hearings that were cancelled 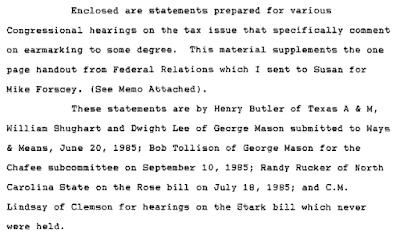 Telling the tobacco industry what the content of your testimony will be cannot be considered as normal academic behavior.