The tobacco economists network - or how the Tobacco Institute recruited over 100 American economics professors. Part 8 of many

Committee on taxation and economic growth

At the end of 1983 the Committee on Taxation and Economic Growth was created, chaired by Robert D. Tollison. Most likely it was a tool to attract and recruit new economists to the network, but it also provided testimony at several US Treasury Meetings and other hearings at a federal level, all in favor of the tobacco industry.

The 1984 annual report to the board of directors of the Tobacco Institute reads:

The five economists were:
The report of the comments made at the meeting are interesting too, as they illustrate the economists testimonies were not the work of independent academics. 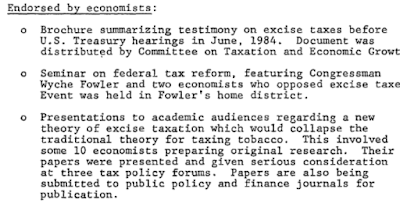 and for the ongoing projects (same memo)

The brochure mentioned was this one

The booklet liked like this (idem for the other economists) 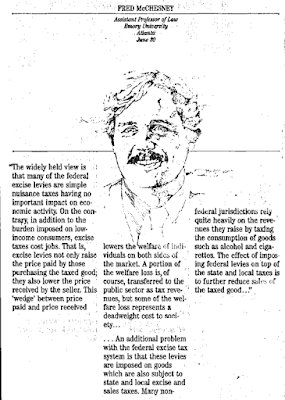 The snippet shows the brochure contained nice drawings of the economists. The money for those drawings ... came from the Tobacco Institute

There may have been more publications, but in 1985, or AFTER the creation of the committee, the industry reported (1985 annual meeting) 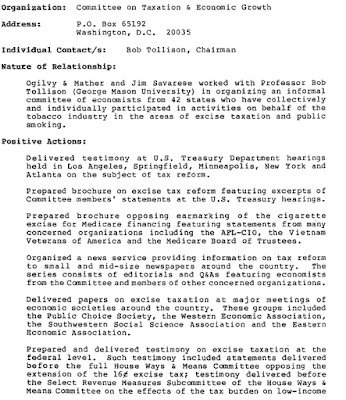 Then, in 1986, the committee suddenly disappeared from the files. Ultimately, the economists probably were more useful as a secret network with the connections with the tobacco industry being less obvious, than when the economists gathered in a visible group.

Probably the committee idea was abandoned once the industry was sure the economists would work for the industry without needing the cover of the Committee on Taxation and Economic Growth.

In the beginning the industry primarily saw the economists as witnesses during hearings. Ogilvy and Mather's (PR-firm) Maureen Delanty wrote in 1985

The most important thing to remember in using the economists is that these people cannot address the health question. This means they should never testify on behalf of The Tobacco Institute or the manufacturers in any capacity. In the best possible situation, they should be representing a coalition of state business and labor interests. When this is not possible, any group of local businessmen would be satisfactory.

Indeed, the economists can be most useful to the industry in shifting the debate on a piece of legislation away from the health argument (which TI cannot win) and toward a discussion of economics and public policy. This can only be accomplished, however, if the economists are representing some local interest other than the tobacco manufacturers.

The point should also be made that these economists are not "silver bullets ". They are meant to be used in addition to and along with other industry strategies to defeat a piece of legislation.

As for timing -- depending on the complexity of what is being asked for -- four to six weeks advance notice is ideal for completing research, drafting testimony, and briefing the economist. However, something can almost always be prepared on shorter notice. In many situations, we can also help with identifying possible front groups in a local area

Despite the points made in this memorandum, the economists testified on behalf of the Tobacco Institute, and some of them would attack health science. For  now, we can conclude the economists were working as lobbyists, not academics.
Geplaatst door jules op 23:32