The tobacco economists network - or how the Tobacco Institute recruited over 100 American economics professors. Part 9 of many

The question must be asked, whether or not the 120 economists in the network were corrupt. Even though we will soon see examples of economists being dishonest, it is not easy to answer that question. Perhaps some of the economists had the feeling they were trying to create a tax-free utopia, reaching this goal by working with the industry, instead of working for the industry.

The reason why the tobacco industry funded 'research' is clear: buying fake academic credibility by letting the economists write 'scientific papers'. Papers, pure coincidentally, concluding there was no need to tax the tobacco industry. The papers would also provide material for the industry's lobbyists to be used to talk with media and politicians.

The recruited economists were known for their libertarian viewpoints, already opposing any form of regulations/taxes. Thus, some of them might have been "useful idiots,” but most of the evidence argues against that explanation.

Tobacco lobbyist George Berman's testimony in court shows the tobacco industry exploited Robert D. Tollison's libertarian bias to recruit him. The Tobacco Institute never told Tollison he needed to defend the tobacco industry. Instead, they fed him arguments so Tollison himself would come to this conclusion. In the words of Berman from his testimony:


Of course Berman's answer ‘independent’ is not entirely correct: the industry fed Robert Tollison's bias and by doing so was able to focus his attention on their issues in the way they wanted. While Tollison indeed may have concluded for himself taxing tobacco is evil, his conclusion was not entirely independent nor were those of any of the other members of the network.


The most important argument against the useful idiot hypothesis is the fact the early documents of the network state all the economists were listed as ‘tax hearing witnesses’.

That means that every single economist on the list agreed he/she would deliver testimony for the tobacco industry when asked. The documents even specify how many days in advance they should be contacted. The industry described it as follows in a memo sent to its regional vice- presidents 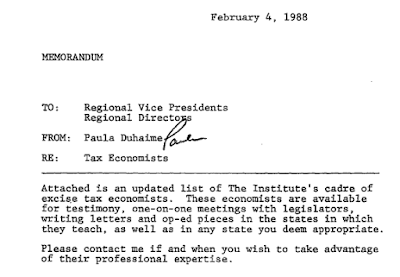 This memo implies every single economist in the network was no longer acting as an academic, but should be considered a lobbyist, as they all agreed to defend the industry. This is true even for the ones never asked by the industry to testify: they agreed they would testify if asked, and that means they were no longer independent academics.

The network constantly evolved, as members suddenly disappeared from the files.

It is possible some members left the network once their conscience came to play.  More likely the industry replaced them, as it always wanted the economists best suited for its lobbying. Tobacco Institute's vice-president Dennis M. Dyer wrote (emphasis added)

The letter does not mention why he wants those three  economists removed, but other documents show the Tobacco Institute continuously evaluated the performances of the economists (this will be subject of another chapter), so probably the economists above were considered sub-par. Also, economists sometimes moved to universities in other states. The industry wanted only one, maximum two economists per state, and when an economist moved, usually only one was kept.

The op-eds the economists wrote had to be cleared by the Tobacco Institute before presenting them to the media. Before clearance, the TI often rewrote their texts and this may have caused friction. In 1996, John David was kicked out the network for not writing what he was told to. James Savarese reported

The Savarese note proves beyond doubt the economists were not free to write whatever they wanted in their op-eds.

Yet there are even stronger arguments AGAINST the useful idiot hypothesis. The industry did not want to recruit libertarians but wanted people to work for them, among other things, by testifying during legislative hearings. Therefore the industry was not satisfied paying libertarians to write anti-tax messages, and the industry pushed its agenda. Further on, it will be shown that the economists were not always comfortable with the messages they were expected to articulate.

The Tobacco Institute gave grants to the economists for research. Perhaps some of the economists really were convinced their free-market papers actually were sound science, despite being paid by the Tobacco Institute. Maybe some of the papers they wrote were. But . . . further on examples prove that the industry read the papers before publication and rewrote some sentences to frame its message. Some economists even "authored" papers they did not actually write.

At least for some network economists money seems to have been a good reason to join the network or stay in the network.  In one case someone left because unpaid. K. Celeste Gaspari was angry the Tobacco Institute did not pay her the $1.000 she thought was promised to her 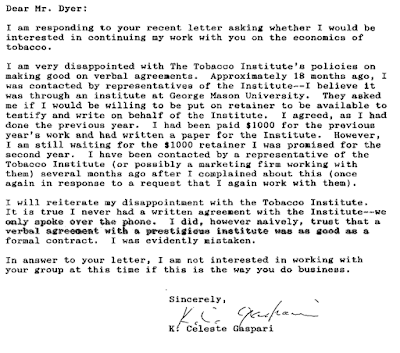 The regular updates made by James Savarese show that members differed in their levels of activity. Besides the core group there were many who only appear to have written op-eds, nothing more. In the LTDL their names only appear when another op-ed round had to be written. Although not members of the core group, and uninvolved with the strategic planning, some of these workhorses loyally wrote op-eds for well over a decade...

Some economists were members of the network only for a short while. It might mean some of them voluntarily left the network, maybe realizing (a little late) what the network really was about. Not libertarianism, not taxes, only tobacco. Yet, again, we have to remember all economists were fully aware they were working for the Tobacco Institute. An example of a short time member is Bruce Vermeulen (his name appears in roughly 10 documents in the LTDL, most of the time spelled Vermuellen). 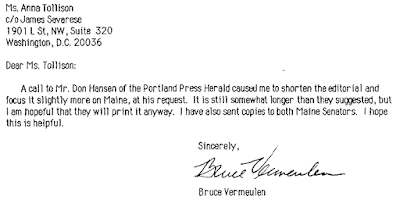 It is clear even a minor member like Vermeulen knew what he was doing. Even though the industry recruited libertarians and used their bias, all the economists knew they were lobbying for the Tobacco Institute.

Twice there were near-simultaneous departures by several economists. The first time was in 1987 (probably a result of an audit of the economists - see further).  The second time was around 1991, when the Tobacco Institute faced a severe budget cut. Until early 1991 Savarese frequently listed "tax hearing" economists in every state. The Tobacco Institute's budget cut must have had a huge impact, as a memo from end 1991 shows only three economists remained as witnesses: Robert Tollison, Richard A. Wagner and Dwight R. Lee. The others would only reappear for writing op-eds, letters and reports.
Geplaatst door jules op 00:32