The tobacco economists network - or how the Tobacco Institute recruited over 100 American economics professors. Part 15 of many


In 1997 James Savarese wrote he was under a new financial arrangement with the Tobacco Institute.

The document is interesting because it shows the industry did not search for the economists, this job was left to Savarese. But:

The audit did generate some unfriendly messages within the Tobacco Institute and whatever sparked the dismay, the industry decided it would evaluate the economists themselves.

As another result of the audit, the Tobacco Institute seems to have made its own evaluation of the economists 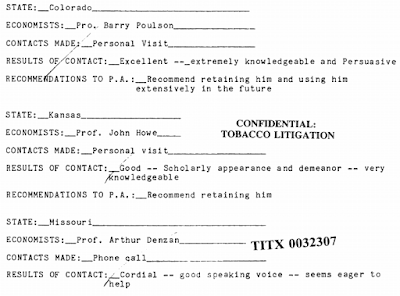 Nevertheless, all three economists above stayed in the network for the next few years and still wrote op-eds (see another blogpost), but perhaps did not appear at any more hearings. The document does not mention why they wanted to replace Cecil Bohanon, but it shows the Tobacco Institute preferred James A. Papke who delivered very effective testimony in 1986 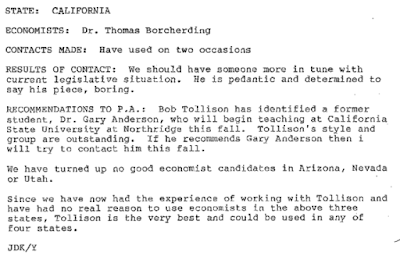 Gary M. Anderson indeed would enter the network and he had already worked as assistant for Robert Tollison). Nevertheless. Borcherding does not seemed to have been kicked out but in the future would only be asked to write, not to deliver testimony.

The industry in the beginning did not like the newly recruited Gary M. Anderson even though he was a member of the core group. Interestingly in this memorandum Tollison/ Savarese are referred to as his "superiors"