The tobacco economists network - or how the Tobacco Institute recruited over 100 American economics professors. Part 6 of many

While still researching the social cost issue, the industry already started planning how to implement the "counterattack". In 1983, the first communications plan emerged, in 1984 a full excise tax plan.

In 1983 a prelimanary draft communication plan emerged. It is an important step toward the industry setting up a secret network of economists. The industry wanted

Several lobbying-programs were selected  like p.ex. a "youth program" . For this series blogseries following domain matters 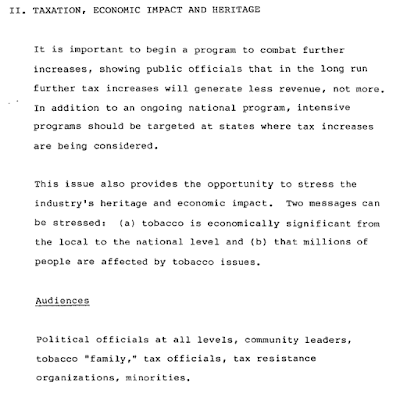 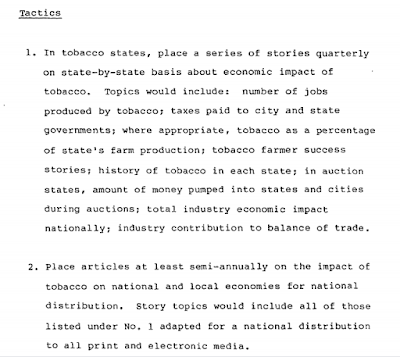 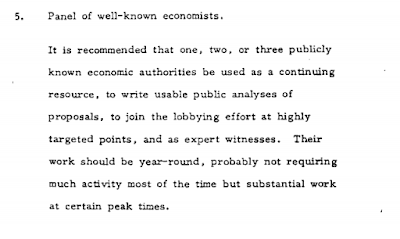 No matter where they got the idea, by 1984 the Tobacco Institute wanted to set up a network of economic consultants, shown by the first draft of their full-grown Cigarette Excise Tax Plan. It is 109 pages long and gives a brilliant insight on how the industry operated (titles aside, all emphasis are mine)

Again, the industry selected some domains

The tactics for the business coalition now mentions the economists network 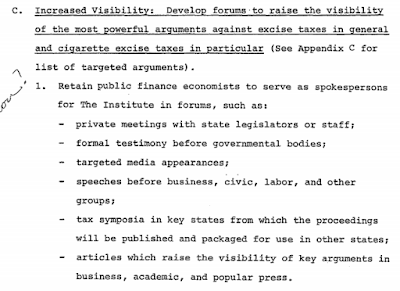 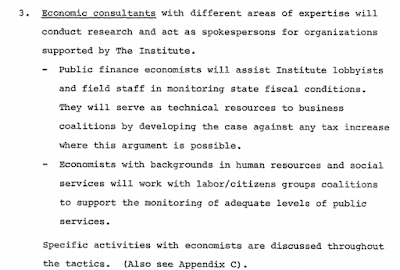 At the time, the budget was still moderate 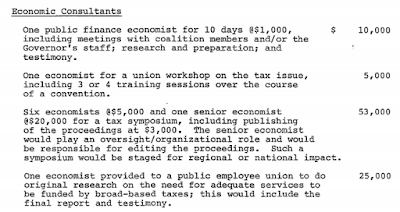 Thus, at the time (1984) the industry already had the idea to use economists, but the industry was still headhunting. The last page of the Excise Plan is wondering who to hire 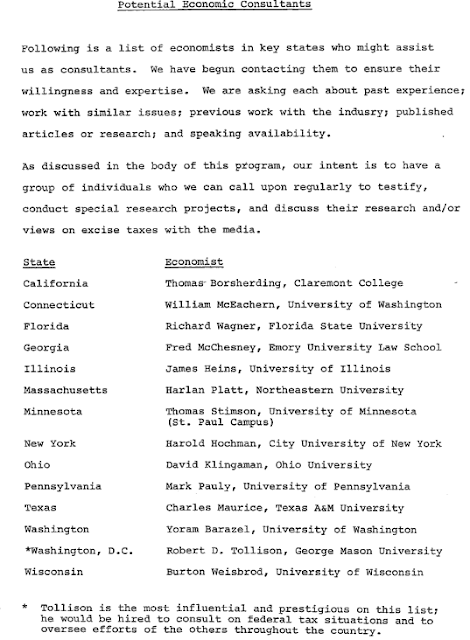 Ed Battison from his side was also headhunting, and his report of the 1984 workshop carries an addendum with potential witnesses

-   GLEN LOURY, economist, Northwestern U., belongs to the group, Council For A Black Economic Agenda

-   AMITAI ETZIONI, sociology professor, George Washington U., has written on Role of Self-Discipline; and Education For Mutuality & Civility (in Futurist, 1982); Government Of Laws— Congress Excepted, 1979; Social Science vs Government—Standoff at Policy Gap, 1978 He is likely to be for individual freedom of smokers--ask Fred Panzer.

-   ROBERT D. TOLLISON, economist, George Mason U., Center For Study of Public Choice, has written on tax reform, social costs of the cigarette excise. Disinterest In Deregulation in the American Economic Review, 1984; Economic Regulation, Competitive Government, Specialized Resources; Instead of Regulation--Alternatives to ...; Rent Seeking, A Survey; F.T.C. Since 1970--Economic Regulation & Bureaucratic Behavior, 1982; Rational Choice & The Taxation Of Sin-a Reply by Grain, Deaton, Holcombe, & Tollison in Jour.of Public Econ.,v.16,1981. He is an authority on the economic inefficiency of excise taxes by his study of their higher than expected social costs.

-   RICHARD E. WAGNER, economist Florida State TJ, has written two papers on the irrationality of earmarking cigarette & alcohol excise taxes for Medicare and Medicaid, one for the recent association seminar and one for the TI; among his several books and articles is a recent text on taxation; articles on Government Spending, Trends and Issues by Beck and Wagner in SEJ, 1982; and Wagner's Law, Fiscal Institutions, and Growth of Government in National Tax Journal, v.30, 1977; he would testify against earmarking excises for public medical programs.

-   D.R LEE, George Mason U., Rent-Seeking & Its Implication for Pollution Taxation in SEJ, v.51, 1984; the Economics of Enforcing Pollution Taxation in Journal of Envir. Sc. & Manag., v.11,1984; Tax Rate & Tax Revenues In Political Equilibrium, by Buchanan & Lee, 1982; he is similar in his views and expertise to Tollison who is a colleague, but he is more inclined to take the inefficiency argument only and is a specialist in pollution problems.

-   P. L. BERGER, Boston U., sociologist, has written among other articles, Democracy For Everyone in Commentary, vol.76, 1983. He is apparently for freedom from individual social restrictions.

-   TED STERLING, Simon Fraser U., has written extensively as a contrarian. Among these are: Filtering Information About Occupation, Smoking & Disease in Jour. of Chronic Disease, 1984; Does Smoking Kill Workers Or Working Kill Smokers?—mutual relationship among smoking, occupation, and respiratory disease in International Journal' of Health Services, vol.8, 1978; Smoking & Cancer in American Journal of Public Health, vol.66, 1976; Critical Reassessment of Evidence Bearing On Smoking As a Cause of Lung Cancer, American Journal of Public Health, vol. 65, 1975; Review Of Claim That Excess Morbidity & Disability Can Be Ascribed to Smoking (Rejoinder) in Journal of American Statistical Assoc., vol. 68, 1973.

Other persons have been identified, but at present, it is not known clearly what their positions on the issues or on testimony are.

Battison's document makes clear that the industry was searching amongst the people already holding views that suited the industry’s purposes, and this indeed would become key in setting up the network: directing people's biases towards the tobacco industry’s ends.

Did the industry know these guys probably would be corrupt? Not very likely. They knew they were libertarians, and that's why they were selected.

Even though it would only be in the 1990's that the tobacco industry launched a full scale attack on EPA, far beyond tobacco related topics, hoping the public would start to have a general mistrust in science, the seeds of this action plan are already in the document of 1984.

The work of the economists is mentioned: 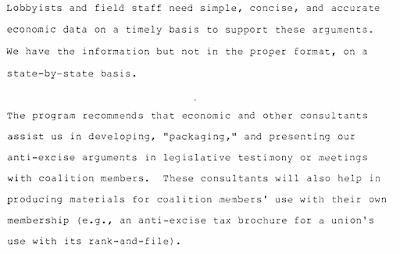 In other words, setting up the economists network was part of well-defined strategy. And the goal was not to produce academic material.
It is clear the industry did not contact just any economist though. It is equally clear the recruited economists knew they would be working with the Tobacco Institute as this was explicitly mentioned to them (the underlining is in the original 1987 memorandum) 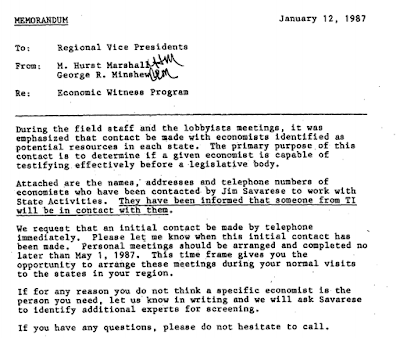 The first network activities appear to date from 1985, or two years before the note above was written. Several LTDL documents suggest the tobacco industry had difficulties finding an economist in every state and it was only in 1987 that Savarese completed the lists. As the industry dumped economists (see further), throughout the existence of the network new economists were recruited
Geplaatst door jules op 01:20