Heartland always had pro-tobacco viewpoints and even invited a tobacco employee (Roy E. Marden) to join its board. In 1999, Heartland president Joseph L. Bast wrote the following letter to Philip Morris:

At least 20 of the network economists are or have been involved with the Heartland Institute. and in 1999, the year Bast begged for money, 6 tobacco economists were members of the advisory board

A 1996Heartland report shows something seen in all libertarian think tanks: an attack on a whole bunch of "environmental sciences". It is very unlikely the think tankers actually knew something about the actual state of one scientific field,  let alone a whole series of scientific domains. Ideology, not science, is the source of this kind of output produced by think tanks 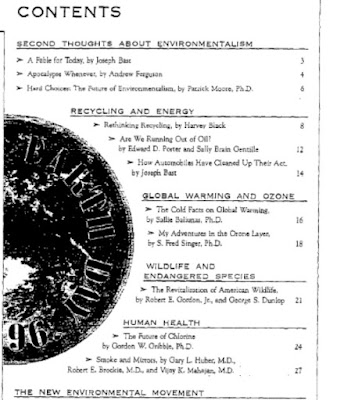 It's one the first examples how tobacco and global warming (and other environmental/ health sciences) are thrown under the bus in one big effort. This was part of the "APCO" plan.

Author Richard L. Stroup was a member of the economists extended network

Gary L. Huber was a researcher working on the link between tobacco and lung cancer, research sponsored by the tobacco industry. In 1980, Huber (re)discovered the relation by producing emphysema in rabbits.

In the prelude to the Tobacco Master Settlement Agreement, he became a whistleblower (in 1997) claiming to be a naïve scientist duped by a broader plan of the tobacco industry. Huber claims in the interview the industry let him though his research on lung cancer, even though they had done the same research before, and already knew the outcome was going to be smoking causes cancer.

Huber said in an interview 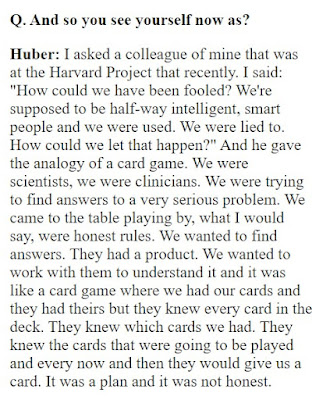 Several sources state Huber was in tears when discovering his entire research was one big waste of time. Most sources feel sorry for the man.

The book Denial: The NFL, Concussions, and the Battle for Truth states Huber promptly lost his grants from the tobacco industry after publishing his results, the industry making clear they weren't too pleased with his work. Huber subsequently moved from Harvard to the University of Kentucky and continued doing research, strangely enough again funded by the tobacco industry. But something had changed: in Kentucky Huber would become accused of manipulating scientific results, sexual harassment and general incompetence. Within a year, he got fired

All this doesn't really explain how Gary L. Huber, then working in Texas, ended up in the 1996 Heartland Earth Day '96 document, writing "In this case, the EPA's risk assessment is built on the manipulation of data, ignores crucial chemical analysis and key epidemiological data, and violates time-honored statistical principles."

I'm not sure what to think about all this, and the supposed knife the industry put in his back

Overview of previous posts here
The previous blogpost mentioned in 1994 the Independent Institute authored the open letter against the Clinton Health Reform Plan. But the Independent Institute was not the only think tank aiming to work with the tobacco industry.
The Alexis de Tocqueville Institution invited itself to the industry in this letter to Philip Morris. Was AdTI at this point no pro-tobacco ? Probably not, the letter illustrates it all started with a remarkably one-sided and bit silly opposition against the tax-increase in the health reform plan. Thos one-sided viewpoint ultimately would become disastrous for the think tank.

Tim Lambert wrote a blogpost in 2004 (The Astroturf de Tocqueville Institute) showing the AdTI indeed started working with the tobacco industry in the 1990's.

Early 1994, Cesar Conda, then president of the Alexis de Tocqueville Institution, had not decided yet who would author the paper (is not it lovely they already know what the report would conclude, without even knowing who would be the author?). Het wrote this remarkable letter: 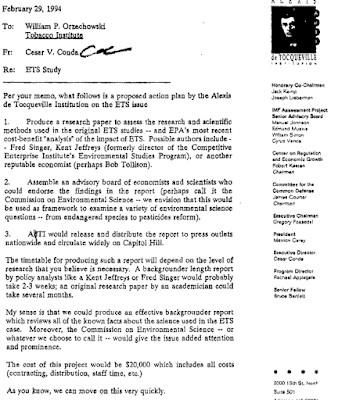 The letter summarizes the corruption of this think tank: fake report, fake endorsements, wide press circulation. And all that for just $20.000
The letter also shows the focus was no longer only to attack regulations on tobacco, other environmental subjects would be thrown under the bus too. And indeed, it is in the pool of different American extremist conservative industry funded think tanks that organized global warming denial would finds its roots.

The letter summarizes the corruption of this think tank: fake report, fake endorsements, wide press circulation. And all that for just $20.000

A while later, Conda wrote another amazing letter 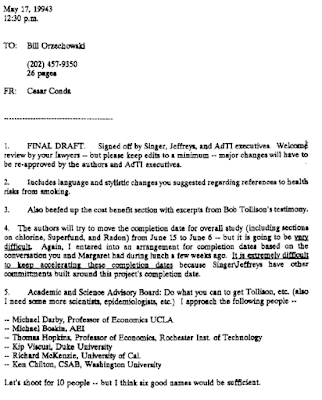 Clearly: this report was as corrupted as a report can be.
The report contains the following passage: 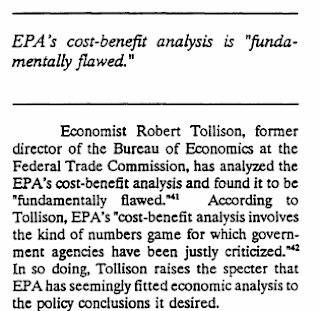 
The industry wanted to use the report for lobbying, that much is certain

The report had the desired result. Samuel Chilcote, president of the Tobacco Institute reported
Who those "peer reviewers" were is a mystery, but probably the 1994 advisory board of the AdTI gives a clue: with Gary M. Anderson, Jeffrey R. Clark, Robert B. Ekelund, Dwight R. Lee, Mark Thornton, Robert D. Tollison, Richard K. Vedder and Richard E. Wagner, eight of the nineteen board members were members of the economists' network. Probably they were the not so critical reviewers of the report.
In 1995 the AdTI published another excise tax report, this time not by the economists though, but by John E. Berthoud, president of the National Tax Payers Union.

In 1998, the AdTI's draft report Tobacco Smuggling: A Worldwide Phenomenon was sent to the tobacco industry.
This is not the work of an independent think tank.
Geplaatst door jules op 21:43 No comments: