TV kijktip : How earth made us 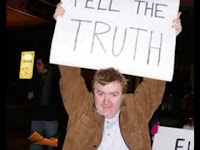 My site’s statistics suddenly show an influx from people coming through the ‘Not Evil Just Wrong’ site, and to my surprise on that site there’s a post still pretending Phelim McAleer was urged to stop filming at the COP15 when trying to interview Stephen Schneider.
Even though last year i already presented a video showing how McAleer’s editing altered reality. When you watch both videos (click the link) you’ll see :
1) The video Mcaleer presents "proves" he was removed from the press event with Stephen Schneider. The video shows Schneider getting agitated, a lady trying to take away the microphone from McAleer and security talking with McAleer.
2) Another video shot by the audience shows what really happened : McAleer heavily edited his video to make things look different :
It’s shocking to see Not Evil Just Wrong is still presenting the manipulated video.
Geplaatst door jules op 18:05 No comments:

Email ThisBlogThis!Share to TwitterShare to FacebookShare to Pinterest
Labels: Phelim McAleer
Newer Posts Older Posts Home
Subscribe to: Posts (Atom)
"The target audience of denialism is the lay audience, not scientists. It's made up to look like science, but it's PR." David Archer