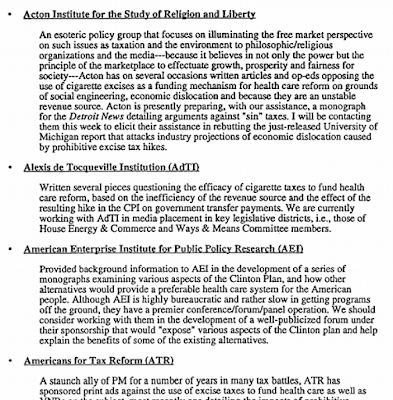 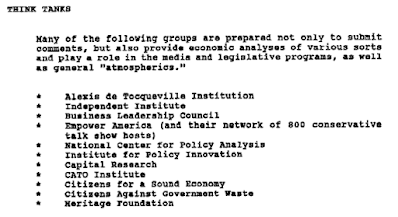 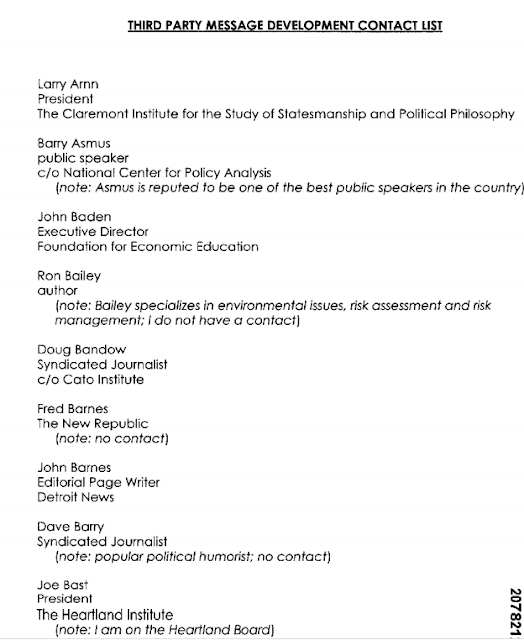 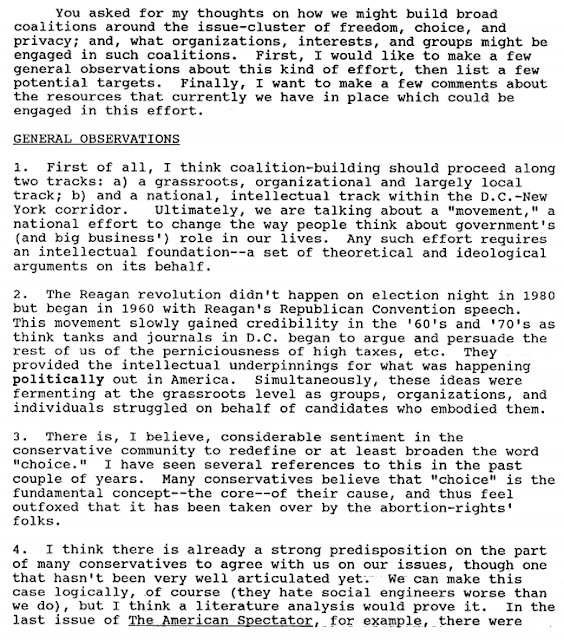 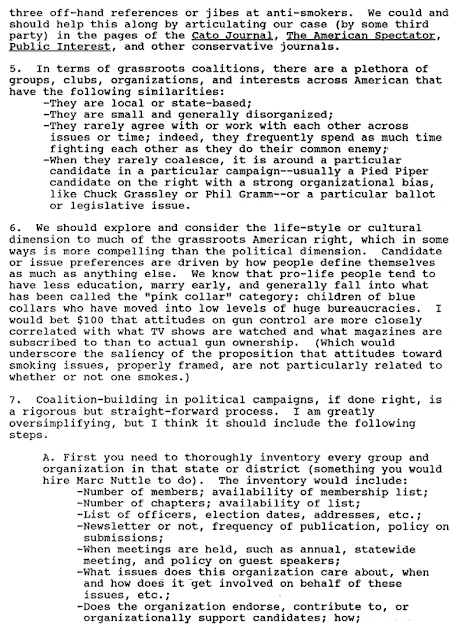 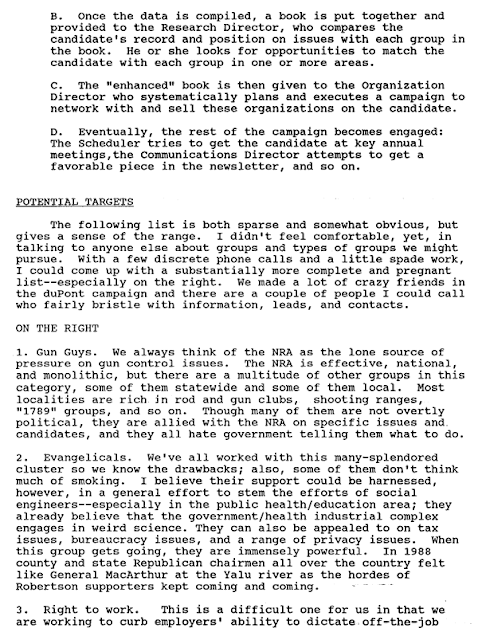 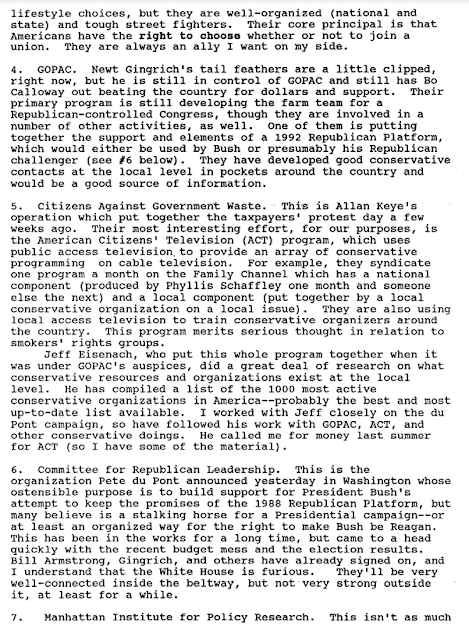 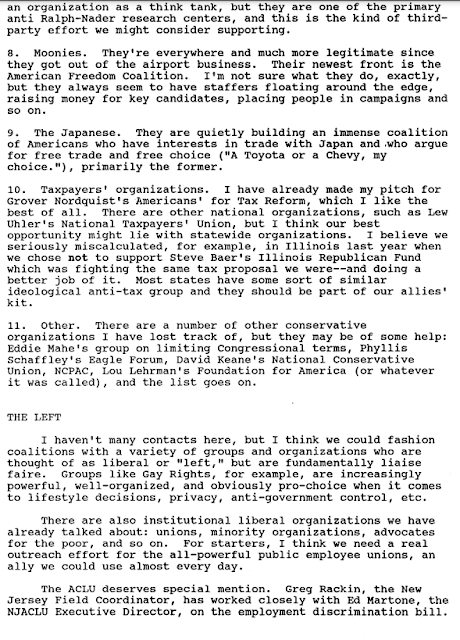 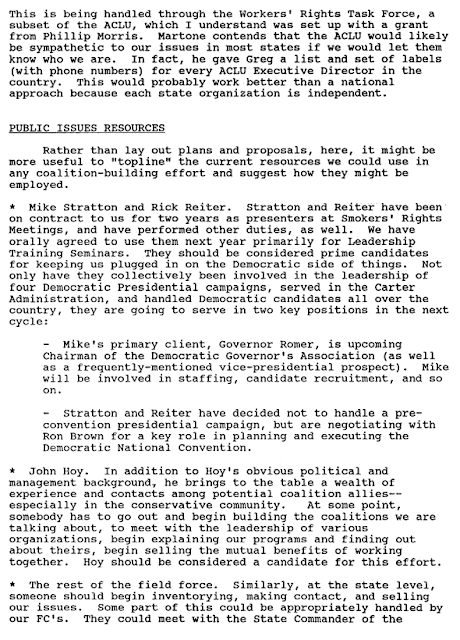 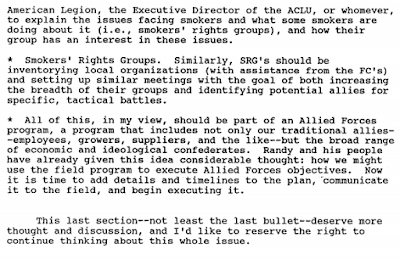 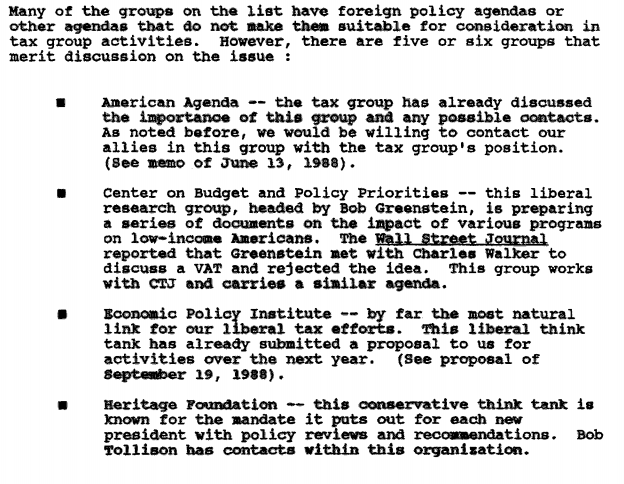 The list of activities of the tobacco economists in the previous chapters was already extensive, but there's one thing not mentioned yet: their activities in a variety of free market think tanks. To understand the reason why so many social cost economists ended up in think tanks, it is necessary to examine some history,

In 1987, the industry evaluated potential allies per US State. The document shows the industry was thinking of partnering with business allies to create a broad coalition of industries lobbying together to put more pressure on politicians. It seems politicians at the time were seen as "aliens", and the industry had difficulties getting in touch with them.

Gradually though the industry shifted viewpoints and their plans became more and more ambitious: at first the industry tried to place articles in the media to alter the public's opinion of tobacco, later it tried to control external allies and media.

Ultimately the industry took the game to a whole different level: no longer did they try to influence the politician's mind on tobacco alone, but instead they tried to alter the politician’s mindset all together, so they would conclude that tobaccco taxes were unnecessary. They had to reach people surrounding politicians, like think tank members, to create a worldview where all environmental sciences would be regarded as junk. Once again, seeding doubt, and stressing the right wing bias of freedom would be the path followed by the industry.

This aim was very ambitious: the industry tried to alter the thinking of broad parts of society!

Again, feeding bias would be the tool. So before looking at the think tanks involved, it is necessary to have a look at the broader plan, but this idea to expand their lobbying has received a fair amount of attention in other papers, so this will only be a short summary.

We'll explore this in the next post, the second part of the report on the secret economists network, hereby focussing on the economists in the secret corruptes network in the 1980's/1990's.

In 1988 Tollison wrote the book Clearing the Air for Philip Morris. How he was recruited has not been discovered.

On top of that, in 1994 Tollison also started testifying for Philip Morris (WRO = Washington Relations Office)

In 1997, Tollison agreed to write a rebuttal to a study on the economic effects of a smoking ban in Hungary

All this on top of his work for the Tobacco Institute, British American Tobacco, other industries, and of course his regular job.
Geplaatst door jules op 00:39 No comments:

In 1993, Tollison and Wagner wrote the 30 page paper Who Benefits from WHO?: Decline of the World Health, commissioned by British American Tobacco as the company needed a writer to attack the WHO

Tollison accepted and made following proposal 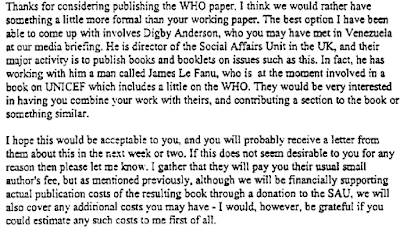 The LTDL is quite complete this time, so we know Tollison’s answer

The report indeed would get published by the UK thinktank Social Affairs Unit. But this memo shows Tollison sent the draft to BAT, not Digby Anderson or the Social Affairs unit, illustrating the SAU was not involved in writing the piece

Digby Anderson was kept out of the entire process leading to the report. Boyse told Tollison on May 21 he should contact Anderson. July 7, Tollison wrote

Was the paper ordered by BAT or the Social Affairs Unit? It is difficult to be certain, but this memo indicates it might actuallyhave been ordered by Anderson, even though why Digby Anderson was in Venezuela at the time is not explained.

In Australia, Tollison may have testified in front of the AustralianParliament
Geplaatst door jules op 00:43 No comments:

The corrupted tobacco economist network Part 49. Or the one with a secret network of lawyers. Different people, same dishonesty.

As mentioned in the first chapters, the 1984 social cost excise plan did not just aim for an economist in every state, the tobacco industry also wanted to set up a network of lawyers.

Savarese was paid $11,400 to set up the network and from Savarese's billing, we know the reason the network was created

The members can be found in the appendix (to be published at the end of the blogseries).

Savarese's wrote small remarks next to some of their names,illustrating the layers werevery well aware why they were recruited
Savarese charged $3.000 for producing 3 op-eds on the topic of ad bans. With titles like "The censorship nightmare" and "Freedom of speech" should just mean that there should be little doubt the lawyers were libertarians too.

Savarese reported and proves again the industry was rewriting the so-called work of 'independent' academics.

Another document shows Savarese seemed to be less in touch with the lawyers than the economists, a message such as this seems unlikely in the economists network

It may be the use of layers was a one time thing. Neither Google nor the LTDL reveal much more activity than listed here. Whatever happened to the network, in 1989 Savarese forwarded to the Tobacco Institute the letters sent by the lawyers to their local congressman.

We know Marshall A. Leaffer sent a letter to Senator John Glen, probably including his op-ed on a possible tobacco advertisement ban


Philip Morris Network
Another document in the LTDL hints there must have been several networks, not just the one's ran by the Tobacco Institute.

The documents carries the remark "not on Philip Morris List", suggesting there may have existed similar networks to the network described in this paper. This has not been explored.
Geplaatst door jules op 09:51 No comments:

The corrupted tobacco economist network, Part 48 - How much did they earn ?

How much did the economists earn ?

An incomplete overview of payments will be given in the appendix (to be published at the end of this series). The list with invoices is far from complete, but the LTDR contains millions of pages, and every single document cannot be checked. This survey has found invoices worth $1.56 million (without expenses like airplane tickets, hotels, ...).


It is surprising how detailed these invoices are, and how the economists let the industry pay for every little thing, even a 0.23 US$ phonecall in an invoice sent by R. Morris Coats

Tollison and Savarese sent so many invoices to the Tobacco Institute, they sometimes got confused 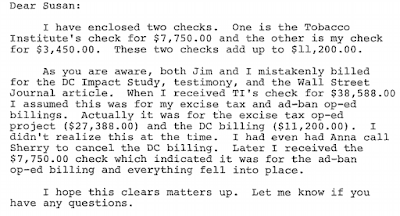 The Anna in the above letter is Tollison's wife Anna who became an employee of James Savarese and Partners, the consultancy firm controlling the economists network. The LTDL shows Anna did not work for free.

Robert Tollison worked for more industries as well as the Federal Government, as listed in his CV (do notice there's no end date given for his work at the Tobacco Institute) 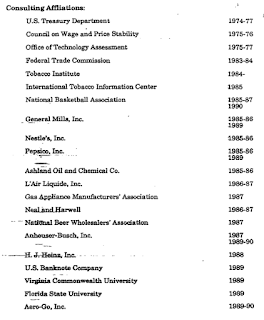 Tollison was one busy guy. The industry noted in 1987

How Tollison was able to combine all these efforts with his work at GMU is an open question.
Geplaatst door jules op 17:35 No comments:

Email ThisBlogThis!Share to TwitterShare to FacebookShare to Pinterest
Labels: Anna Tollison, James M. Savarese, R. Morris Coats, Robert D. Tollison
Older Posts Home
Subscribe to: Posts (Atom)
"The target audience of denialism is the lay audience, not scientists. It's made up to look like science, but it's PR." David Archer