Early 1993, EPA released the report Respiratory Health Effects of Passive Smoking:Lung Cancer and Other Disorders that was close to a final blow on the ETS issue.  EPA concluded that second hand smoking beyond any scientific doubt indeed was harmful, as had long been suspected.

The tobacco industry knew it was in trouble and launched a full scale counterattack against EPA, especially using the strategy of  manufacturing "scientific doubt". It seems from that point the ‘social cost’ strategy became less important as the EPA report demanded the industry's full attention.

But the industry still needed allies and seemed to have followed two main roads: searching for allies to cast doubt on any environmental subject (asbestos, pesticides, greenhouse gasses, etc.). But on the other hand, to really be able to create a broad coalition, the industry needed to translate the industrial message into something grassroots organizations would pick up. And here, the ‘freedom’ message proved to be key to finding free-market allies. The libertarian tobacco-economists were useful to spread this message.

To understand how the industry concluded that the best defense was to attack everything EPA does, we have to look at the work of Philip Morris' PR-firm APCO-Associates, which advised the industry to set up

But unlike with lobbygroups like the Center for Indoor Air Research, the tobacco industry this time had a bigger plan, as seen in a memorandum probably written by Philip Morris.

As the industry realized it could not defeat EPA alone, the goals were to

This is taking the lobbying to a new level, and this is where the cunning plan of Tim Hyde fits the bigger picture: the lobbying was no longer focusing on tobacco and its consequences, the lobbying was about creating a new political reality.

One part of the strategy still sounded familiar, as it was about creating scientific doubt

TASSC was no longer an astroturf organization attacking only tobacco issues, the industry wanted a full scale attack, and was thinking about issues like 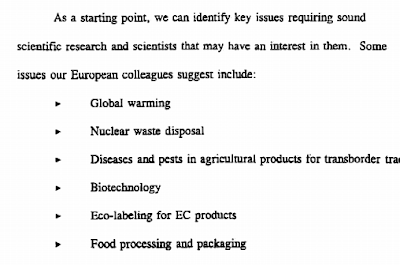 To avoid detection, TASSC had to look like a grassroots organization, even though it is clear TASSC never was more than a lobby-tool as can be read in the proposed plan for the public launch of TASSC: 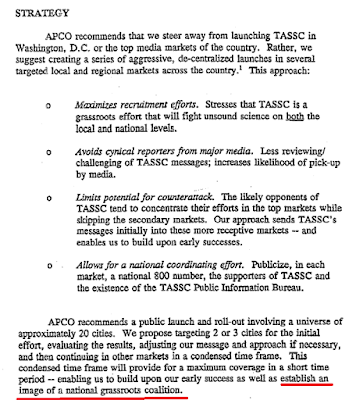 As with the previous economists networks, there would be media training

The roots of organized denial of global warming would get started in the same circles, and by the same people, as the circles the tobacco industry used. TASSC and the same think tanks working on tobacco, would be the place where fossil fuel companies found a tool, the people (libertarians) and a strategy to attack climate science. And this is why someone running a climate blog has taken a close look at the tobacco strategy.

TASSC was funded by Philip Morris but it also involved companies like Exxon and recruited people who were global warming deniers like S. Fred Singer and Patrick Michaels, in addition to tobacco consultants such as Thomas L. Wyrick and Richard L. Stroup (both in 2015 were members off the Heartland Institute, a think tank denying the health effects of tobacco and man-made global warming).

Using the 'junk science’ label to discredit scientific work was adopted by the tobacco economists, as in an op-ed by Clifford Dobitz from 1998 titled Junk science taints EPA's smoke claims The same Year Robert L. Sexton wrote Did EPA use junk science ? The use of this language is no coïncidence but the result of a group effort.

It was by mingling of 'freedom' with tobacco (and asbestos, greenhouse gasses, etc.), the industry ultimately was able to create a message that indeed found its way into libertarian groups. And through these groups, the doubt and freedom message would become an important political factor in American politics, because the think tank network is huge, extending to many other people, foundations, companies and universities.