Guestpost by Daniel Fielding of Shades of Green

CEOs of leading global multinationals highlighted the urgency of constructing a global plan for a low-carbon economy with the purpose of ensuring global health and safety. Many had lower expectations for the COP16 agenda than the Copenhagen conference in 2009; COP 16 underscored the urgency and importance of the corporate commitment to the relationship between climate action and corporate social responsibility. The conference also showcased the significant impact of government accountability and civil society in taking position steps toward eradicating global warming and environmental degradation.

DOW Chemical Corporation CEO, Andrew Liveris discussed on the panel the importance of building a low-carbon international economy. He addressed economic and political pitfalls and strategies for pursuing a globally clean economy. Liveris commented that a green, carbon-free global economy would never be realized unless there is strong public policy and governmental incentive. Furthermore, he explained how DOW is incepting innovative financing mechanisms and investment opportunities for a green business future. Liveris also went on to mention the importance of efforts being made in third-world nations.

Such efforts include bringing advanced water filtration techniques to developing countries; many of which are currently suffering from water shortages. Specifically, they have worked towards making their reverse-osmosis and other filtration systems industrialized nations have been using for years more affordable and accessible to developing nations

The outcome of the summit was an agreement, which works to reduce global warming to less than 2 degrees Celsius, which is above pre-industrial levels. It also asks that developed countries reduce their greenhouse gas emissions as pledged in the Copenhagen Accord (COP 15), as well as create a plan to keep emissions low permanently. The agreement includes a "Green Climate" fund, projected worth in excess of $100 billion a year by 2020. This money will to assist developing countries in financing emission reductions and adaptation policies.

Michael´s climate blog runs an excellent article (in German though) EIKE-Ein Institut stellt sich vor demonstrating EIKE is nothing but a lobbytool. Recommended literature !
Do notice how the Europäische Institut für Klima und Energie (EIKE) shares its president with CFACT-Europe, has the same postal address as CFACT-Europe and the CFACT-people are exactly the same as the people behind EIKE. It’s one of the clearest examples of astroturfing I know, EIKE is a PR-tool dressed up as science. 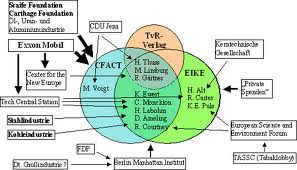 The Dutch representative for CFACT/EIKE is Hans Labohm, and indeed his posts on De Dagelijkse Standaard often are nothing more than translations of the same articles running on the EIKE-website
Geplaatst door jules op 21:45 No comments:

Email ThisBlogThis!Share to TwitterShare to FacebookShare to Pinterest
Labels: De staat van het klimaat, Marcel Crok
Newer Posts Older Posts Home
Subscribe to: Posts (Atom)
"The target audience of denialism is the lay audience, not scientists. It's made up to look like science, but it's PR." David Archer