A consensus is not science ? Contrary !

Even though it’s such an easy topic, few things have been so poorly understood by laymen as the role of a consensus in science, leading to phrases like ‘a consensus is not science’.

This statement could not be any further from the truth.

But it takes some understanding of the philosophy of science to understand what is wrong with the statement. Many people seem convinced ‘consensus’ implies scientific proof is lacking. Before dealing with consensus, it’s important to understand what “scientific proof’ actually means. I’ve dealt with this issue in my post Loose thoughts on some frequent fallacies. It’s very important to understand the philosophical travesty the post tries to make clear : a ‘proof’ in the sense of an ’absolute truth until the end of time’ does not exist.

As odd as it may sound, the word proof only reflects the current state of knowledge, we are not able to prove anything. Even for theories we ‘absolutely know for sure’ they are real we don’t have any proof at all. Just assumptions (usually strengthened by conducting experiments). Take for instance the gravitation-theory. It’s merely an unproven theory !
Let’s ask a tricky question : how do you ‘prove’ gravity is not just a theory ? I’ll give you a hint : you can’t. Really, it’s impossible !

Sure, you can write down Newton’s law :

Does this law ‘prove’ gravitation ? No !

Sure every experiment you conduct will obey he law, but this doesn’t prove the equation. Not at all. It just doesn’t falsify the theory, that’s all. Conducting the experiment a zillion times does not provide any evidence or ‘proof’ next time the apple will fall from the tree too. After all, one day, who knows, the apple will not fall. The point is : science works with assumptions and predictions, but from a philosophical point of view none of these provide an absolute evidence or ‘proof’.

Nevertheless, no one in their rightful would discard gravitation. Why ? Scientific theories never ever are accepted because they are proven to be right (as we cannot proof them) but because scientists accept them. In other words, because there is a consensus.

Many people fail to understand this. While science accepts the evolution theory, there are people like Erich von Däniken saying extra-terrestrials came to earth and initiated earth’s civilisation. Why isn’t his theory accepted ? After all, we cannot prove aliens did not come to earth ? One reason is there’s a whole lot of positive assumptions supporting the evolution-theory, while there are none for the ET-theory. But as none of them really ‘prove’ anything, the simple reason evolution is accepted is a vast majority of scientists accepts the theory.

Email ThisBlogThis!Share to TwitterShare to FacebookShare to Pinterest
Labels: consensus

I report to you on a strange finding that seems to indicate deep cracks in the very fabric of time and logic, which accidentally manifested themselves in several recent posts on the climate "skeptic" blogosphere.

It all began at the time of the Great Oil Crisis, when in 1973 little rascal Stefan Rahmstorf, then 13 years old, drove his future colleague Jan Veizer out of Germany, as chronicled in the testimony of Horst-Joachim Lüdecke, press secretary of the German climate "skeptic" group EIKE, in a December 2010 non-public letter to German television channel ZDF:

Rahmstorf is the political Savonarola of the German climate scene and has driven his colleague Jan Veizer, who as opposed to him was showered with real research awards, out of the country using unsavory slander, supported by German coleagues of the same ilk. Veizer now teaches and researches at the Canadian University of Ottawa as "Distinguished Professor". Especially this action by Rahmstorf shows parallels to the Deutsche Physik of the Third Reich, which drove our best Jewish heads out of the country.

Fast forward to June 10, 2011. Members of the Green Party of Germany hold a meeting at the Bundestag, where a colorful mix of citizens listened to talks by Stefan Rahmstorf (now at the Potsdam-Institut für Klimafolgenforschung), Dieter Plehwe (LobbyControl) and Tim Nuthall (European Climate Foundation). One of the listeners, Dr. (in dentistry) Michael Kanno of Berlin, succeeded in writing a protocol about the session, which was proudly published by EIKE on July 11. It is a mostly helpful summary, showing the event through the eyes of people that think Big Government is trying to rob them of their hard-earned money by hoaxing them into a scientifically unfounded panic about climate change, which has always occurred, and will always occur, caused by fluctuations in the intensity of our dear mother the Sun, and who are we to be so arrogant to think we could change the climate — but I digress. Ah right, the mind-twisting part of the Kanno protocol, where he summarizes Rahmstorf's talking points:

[According to Rahmstorf] EIKE works with reasoning tricks, trying to fool laypeople. Mr. Lüdecke reminds him with the "Deutsche Physik" of the Third Reich.

This is where it gets interesting. Your humble chronicler happened to be present at what he thought was the same meeting. What I witnessed was a slide by Rahmstorf titled "Nazivergleiche gehören wohl dazu..." ("Nazi comparisons seem to be part of the etiquette..."), followed by this quote: 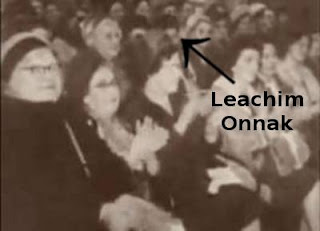 Fans of DC Comics and/or Seinfeld may or may not be familiar with Bizarro World, where according to Wikipedia »Bizarro No. 1 [is appointed] to investigate a crime, "Because you are stupider than the entire Bizarro police force put together"«, and people not entirely unlike us, but behaving diametrically opposed to us, inhabit a cubeiform planet called "Htrae". At this point your humble investigator needs to mention that when he scanned the personae present at said meeting, a name tag with an unusual name caught his attention for the fraction of a second (note: image is for illustration purposes only). I did not give it any importance and soon forgot all about it, until EIKE press secretary Horst-Joachim Lüdecke wrote these strange lines below "Michael Kanno"'s meeting summary:

On the unsavory remark, with which Rahmstorf tries to connect me (Lüdecke) with the "Deutsche Physik" of the Third Reich, I want to remark that there were victims of Nazi rule in my family. Rahmstorf's Nazi cudgel as an argument in scientific debates is, cautiously expressed, odd.

This in turn led North American Pierre Gosselin, who's now located in Northern Germany and writes about the impending Global Cooling on his blog NoTricksZone to write a post titled »Rahmstorf Compares Skeptics' Science To "Aryan Physics Of The Third Reich"«:

There was only one possible explanation for all of this: By some weird coincidence, probably due to cosmic rays, Leachim Onnak and Michael Kanno switched dimensions without noticing, at least on one occasion between June 10 and July 11. This resulted in the summary about Nafetš Frotsmahr's talk ending up in our dimension, but only after Tsroh-Michaoj Eckedül had a chance to comment on it. This, however, is doubtful as an exhausting explanation, mainly because the author goes to great lengths to specifically brand his comment with "Lüdecke" in-text. This would imply that while Lüdecke is originally from our sister sphere, it is Eckedül that was born here and is now roaming the other dimension, forever failing to warn the Bizarro inhabitants about the danger of Global Warming. It is thus highly likely that we are witnessing dimensional entanglement, where members of Bizarro World live amongst us. This would also neatly explain Gosselin's fear of Global Cooling, which is indeed a huge problem where he seems to come from.

Maybe they should appoint our Luboš Motl to investigate (he's a string physicist after all), in a kind of cross-dimensional partnership.
Geplaatst door Captain Pithart op 22:13 12 comments:

Email ThisBlogThis!Share to TwitterShare to FacebookShare to Pinterest
Labels: EIKE, Godwin's law, Horst-Joachim Lüdecke, Stefan Rahmstorf
Newer Posts Older Posts Home
Subscribe to: Posts (Atom)
"The target audience of denialism is the lay audience, not scientists. It's made up to look like science, but it's PR." David Archer