A Dutch blog called Sargasso also noticed the clear cherry-picking and demonstrates what happens if you prolongue the graph Labohm/Rörsch (L&R) use : blogger Steeph went to the NASA-GISS data set and instead of using L&R's ten year timespan he randomly added some extra data: 1,5 year at the beginning, one month extra at the end.

The result can be seen in this graph. Suddenly the temperature decline changed into an increase, and a fast one. Steeph correctly concludes that the chosen timespan by L&R strongly influences the result and that the authors carefully selected the data to get a drecreasing trend. Clearly the definition of a cherry-pick.

Steephs criticism resulted in this comment by Rörsch (my translation)


I think Sargasso presents statistical bullshit. Why, i will explain in future publications


I'm anxious to see what his explanation will be, but he already gives a clou in the comments section of his Klimatosoof article :

in my previous comment i already mentioned what i consider to be sherry pikking [presumably this is humor. J] : It's solemly considering a linear trend without considering other [sinusoïdal] curves.

I have the feeling Rörsch is so obsessed with sinusoïdal curves he fails to understand what the cherry-picking citicism he receives actually is about, which makes him both ignore the criticism and makes him adressing a strawman's argument instead. In the comments section of the Klimatosoof i copied Steeph's graph with the extended time span and the effect on the trend.


The graph presented by Jules clearly shows a linear trend (on the X-axis the years are missing, but we can understand which period is depicted).

The result is Rörsch actually is confronted with a graph of which he doesn't know what timespan it is dealing with.

Which strangely enough doesn't stop him from commenting on it anyway :

I think no-one will deny this linear trend. It is a result of the recovery of the last ice-age, on which was superposed the one of the Little Ice Age in our Golden Age [in Dutch, the sentence is just as weird, i'm translating it as it is. The Dutch Golden Age roughly spans 17th century]

As said, the Sargasso-graph deals with the last 11 years. Rörsch's comment is adressing a totally different period and is ridiculously wrong.


Resumed, this is what you need to do to repeat what Rörsch has done : Inadvertently, Rörsch has given a brilliant insight in the way he conducts science ...
Geplaatst door jules op 00:15 No comments:

I know i've been absent from blogging for a while but my job, involving real science, still has priority.

Yet simply have to mention this post by Hans Labohm published on Theo Richels website Klimatosoof which presents a paper written by Prof. dr. ir. Arthur Rörsch (a 75 year old emeritus in biochemistry actually, but that's qualifications enough to be a prominent climate skeptic nowadays) in which he summarizes some of his objections towards climate science (my translation, my emphasis) :

Observations show that CO2-concentrations since the beginning of the century has risen some 5,5% while there was no worldwide temperature rise. There are even some indications since 2006 temperatures have been decreasing, and this trend will continue in the next decade.


The article on the Klimatosoof was written in responce to the Dutch PCCC-report.

Amusingly, given the quote above using a three year temperature trend, Rörsch (or Labohm ?) accuses PCCC of cherry-picking : he complains "PCCC presents a misleading graph" for the time period 1900-2008 which could make the people think earth has been warming as "it gives an impression of a continuous rise".

So, if i may believe the Klimatosoof article presenting the entire available data set that is available (1900-2008) is called "cherry-picking", while isolating 3 single years out of that very same dataset is called "science".

The PCCC-graph which gets attacked looks similar like this one from NASA: 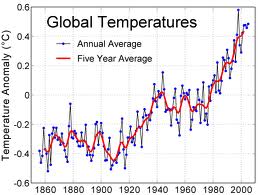 Rörsch/Labohm, instead of using all those data in the graph ditch all data that doesn't fit their predesigned conclusion. Instead of using this 100 years-timescale they present a graph which looks amazingly familiar as it's Labohm's well known misleading graph of the past decade:

A. Rörsch has bewildering ideas on science.
Hans Labohm remains a fraud.


Actually Rörsch presents the graph in a context that CO2-levels in the atmosphere don't correlate all that much with temperature. I believe i linked to it before, but this post on More grumbine Science is a must read on the correlation between the two.

Email ThisBlogThis!Share to TwitterShare to FacebookShare to Pinterest
Labels: Arthur Rörsch, De Dagelijkse Standaard, De Groene Rekenkamer, Hans Labohm, Klimatosoof
Newer Posts Older Posts Home
Subscribe to: Posts (Atom)
"The target audience of denialism is the lay audience, not scientists. It's made up to look like science, but it's PR." David Archer