Hans Erren vs the people of Shishmaref

In his blog on the Dutch newspaper Volkskrant called klimaathype (i suppose this needs no translation), skeptic Hans Erren presents his views on Global Warming. 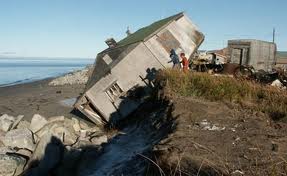 Erren's latest post is comparing the Dutch Wadden Sea island Vlieland with the Alaskan island Sarichef where the Inuït Village Shishmaref is located. The island received some attention in Holland because of the movie The Last Days of Shishmaref by director Jan Louter, which tells the story of the islanders who fear they'll have to move to the mainland as their island slowly gets swallowed by the sea.

The Wadden Islands (or Frisian Islands) including Vlieland, are a chain of islands in the North of Holland and continuïng in Germany until the border with Denmark.

Basically the islands are sandplates sticking out above sea level, and therefore the tide has great influence on their shorelines. Mankind has done efforts to decrease erosion in order to slow down natural processes, but of course the process itself cannot be fully halted.

At the erosion side, the islands shrink while at the other side progradation makes them grow. As a result the shorelines are ever moving and in Dutch we say the islands are "walking". Because of erosion, in 1736 on Vlieland an entire village (Westeynde) was swallowed by the sea.

Erren compares the present events at Sarichef, a small (7 km long) sandy island in Alaska, to what has happened to Vlieland in the past.

Sarichef island also knows a lot of erosion, to such an extent the islanders are worried their entire village might disappear in the nearby future as erosion is taking away a couple of metres of land every year.

There are several different natural causes for this erosion, yet some effects can be linked to global warming. The arctic area in recent times has known a fast increase in temperatures, causing the permafrost to melt, making the soil more vulnerable for erosion. Above that, increased temperatures result in less sea-ice, ice which serves as a natural storm surge.

The AAAS-website has a longer article on the subject : In Arctic Alaska, the Warming Climate Threatens an Ancient Culture


On the Volkskrantblog, Hans Erren writes (my translation) :


Sarichef is a Wadden Island in Alaska, comparable to Vlieland. For the inhabitants from the village Shismaref the same fate is waiting as the inhabitants of Westeynde. They only just started living there and aren't used to walking islands, therefore they blame climate change.

That's why they don't want that the island to 'disappear in the sea". Is the Island disappearing ? Well, no. It's just moving a little bit. At the South-West side, there's a strong growth, just like on Vlieland.


Of course, even without AGW there'd be erosion on Sarichef, that much is true. But as mentioned above, global warming probably increases erosion. Yet even if AGW is a hoax, there are two very clear problems with Erren's words. Erren writes :
It's clear Erren wants to make his readers think the islanders simply aren't aware of natural processes on such islands. What he doesn't mention is the area has been inhabited for hundreds of years already. All that time, the 'walking-island-effect' has occured, and the inhabitants know the phenomena.

in the comments section, Erren is asked for some more information and a source for his claim. His answer is nothing but an attempt to distract attention from the question :

All i can do is point out the similarity in geometry between Vlieland and Sarichef. For the Wadden Islands there's this map by Gerbrand Gaaff (...) Progradation at the South, Erosion at the North Side.

Clearly, he doesn't even get close to answering.

I spent an hour to find a source which supports Erren's statement but all i could find was info (p.ex. in Living with the coast of Alaska by Mason et al.) which says the island doesn't grow on the South-East as Erren states, but actually is lenghtening to the North-East

Meanwhile on the volkskrantblog, Erren again is asked for sources. Given the red herring in his first reply, I'm rather curious now what he's going to say.
Geplaatst door jules op 22:56 6 comments:

Email ThisBlogThis!Share to TwitterShare to FacebookShare to Pinterest
Labels: Hans Erren
Newer Posts Older Posts Home
Subscribe to: Posts (Atom)
"The target audience of denialism is the lay audience, not scientists. It's made up to look like science, but it's PR." David Archer