It is clear all the economists were fully aware they worked with the Tobacco Institute. Yet still I think it is possible when joining the network, some of the economists presumed they were sought to nothing but expressing their worldview. They were part of one big corporate conspiracy though, even if in the beginning not all of them might not have realized this themselves. 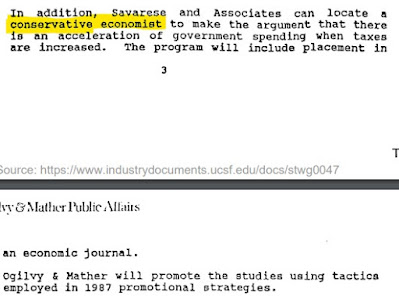 George Berman's testimony in court shows the tobacco industry exploited Robert D. Tollison's libertarian bias to recruit him. The Tobacco Institute never told Tollison he needed to defend the tobacco industry. Instead, they fed him arguments so Tollison would come to that conclusion. in the words of Berman "we had focused a leading economist's mind on this particular problem and he was now able to be a spokesman for the solution he had come up with". Question: independently ? Berman's answer: "independently".

Of course Berman's answer "independently" isn't entirely correct: the industry fed his bias, and by doing so has been able to alter his mindset, picking up the tobacco issue. While Tollison indeed may have concluded for himself taxing is evil, his conclusion wasn't entirely independent.

The extremist worldview of the economists is obvious, and as shown even the industry sometimes had doubts on this worldview, afraid it could harm the industry being associated with people attacking tax-increases with op-eds like the one by Cotton Maher Lindsay titled excisetaxes: fascist finance, effectively comparing tobacco excise taxes to the practices of Italian fascism under dictator Benito Mussolini. A bit far-fetched, no?

Or what to think about thois one; Tollison and Wagner writing the op-ed scientific integrity consumed by anti-smoking zealotry.  The same year the corrupted Tollison wrote a letter to the editor stating

Do remember this was written by a man heading a corrupted network, earning him well over 1 million dollars. Shameless.

Yet at the same time, the extreme views are exactly the reason the economists were recruited. As shown, Philip Morris was interested in Dwight R. Lee *because* he was an extremist, writing giving the EPA authority over indoor air "would be likegiving a machine gun to a child".

The industry never asked Lee to take such positions. Whatever a scientific viewpoint is, there will be always be a deluded naysayer. The industry's tactic, seen in all the headhunting documents, is always showing the same pattern; the industry deliberately searches for nutcases, then giving them lots of money and making sure they receive media attention. To the laymen, the illusion then arises these extremists ' viewpoints might mean there actually is a scientific discussion. This is the doubt the industry wanted to create, because many people think when two different opinions exist, both must have some merit; Quod non, one can be completely wrong.

Were the economists corrupt ? Were they lobbyists, or just a pragmatic free-marketeers: was libertarianism the motivation driving the economists ? Or were they really for sale ? The Legacy Tobacco Documents Library doesn't provide a clear answer to these questions. Ultimately, it depends on the definition of corruption: the first thing we think of hearing the word probably will be: people doing or telling things they wouldn't do if not being paid.

Following that definition, it is clear some economists were probably dishonest: they signed things they  knew were flawed (Poulson), or lied being independent citizens (Militello). But this necessarily mean they defended work they did not believe in at all.

There's also another form of corruption: people being paid to tell ... exactly the same thing they would be saying if they would not receive money. In the case of the economists, I think it's clear that if they would not have accepted money from the tobacco industry, they still would be objecting any form of taxation.

This form of corruption isn't so much about whàt they said, but what they did not say. The website ScienceCorruption.com has done a tremendous job looking at the activities of the social cost consultants, giving a chronological order of the documents regarding the individual members. In 2011  Dominick Armentano wrote an error loaded reply (at the bottom of the page) addressing one strawman after another.

I guess the most interesting part in Dominick Armentano's reply, is the mere fact Armentano thinks his actions are defendable.

His answer misses a couple of points. ScienceCorruption's reply summarizes the entire problem with the activities of the network:

And those five points imply that every member of the network who ever delivered any output for the industry was corrupt.

Even though this series of blogposts isn't exactly short, there's much more to add to the tale of social cost and the economists network.

The 1984 Excise plan indicates the industry did not just want economists, but also wanted to recruit lawyers. We know there were attempts to create the network, but was it ever fully established ?

What was the role of the people "not on PM's list" ? Why does this document carry this strange heading? Were there other fully developed networks ?

We know some economists dropped out the network, but don't always know why. It is clear some were sacked, but were there any network members whose conscience came to play ?

On top of that, I'm pretty sure i did not discover all documents in the LTDL: the documents in the LTDL have been scanned and automatically converted to text, but the conversion sometimes failed, with letters getting switched etc. p. ex. Tollison can be found in the database as Tollison, but also Tol!ison, Toiison, Tollis0n, etc... This makes it difficult to find the right search queries...

One thing is clear: lots of questions remain unanswered...