The social cost economists were only one of the networks and tactics used by the industry. An example of other lobbying is found in the work of James T. Bennett and Thomas J. Di Lorenzo for the  Atlas Economic Research Foundation (nowadays the Atlas network) 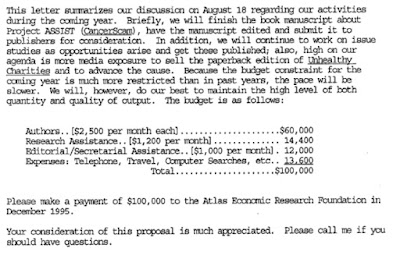 Again, we see a think tank operating as a front for a tobacco funded book. And while the authors are not part of the social cost economist, just like the economists the authors both are ... libertarians active in numerous think tanks

James T. Bennett is/was associated with the Ludwig von Mises Institute, the Virginia Institute for Public Policy, the John Locke Institute and currently is on the advisory board of the global warming denying Committee for a Constructive Tomorrow

Thomas J. Di Lorenzo from his side has ties with the Independent Institute, Capital Research Center, the Ludwig from Mises Institute, the Property and Freedom Society, the Heartland Institute, the National Center for Policy Analysis, and the Committee for a Constructive Tomorrow

Or in other words: the authors are active in the same kind of thinks as the social cost economists... And both have been working at George Mason University, just like the core-members of the economists network. Something seems rotten there.

The industry paid the Atlas Economic Association in 1995 for the book CancerScam, but a year before it also paid $5000 to the Independent Institute for work done by Thomas J. Di Lorenzo, as this letter by the its president Donald J.Theroux demonstrates

And this is how think tanks became one blur of economists/lobbyists, the same think tanks that became the ideological basis for a big part of the American GOP in the early 21st century.