The tobacco industry isn't the only industry using think tanks to manipulate the audience. In 1999, the Independent Institute sponsored a full-page advertisement (Open Letter on Antitrust Protectionism) in the Washington Post and the New York Times, signed by 240 economists.

25 of the people signing were members of the Tobacco Institute's economists network.

The letter sounds familiar, it's just the same old call against regulations. The only real question is: were they following their political beliefs, or was the Independent Institue not anly gaining money from the Tobacco industry, but also from Microsoft ? And is it a coincidence in 1998 tobacco network economists William F. Shughart II and Richard B. McKenzie wrote the piece is Microsoft a monopolist? or where they paid to write it ?

Well, you probably already guessed it: According to the NYT in 1999 20% of the Independent Institute's funding came from ... Microsoft: 'Unbiased' Ads for Microsoft Came at a Price

Economists for sale ? Or was it pragmatism, and was the Independent Institute just working together with the industry to reach a libertarian objective ?

By 1995 the tobacco industry was already working with a lot of think tanks and businesses, trying to attack the government on all sorts of environmental sciences 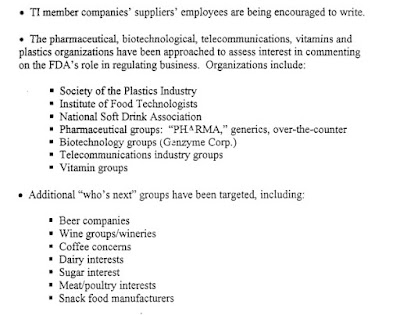 It may or may not be a coincidence, but in 1997 tobacco economist Richard Wagner wrote a chapter on the social cost of alcohol in a book edited by another network member, William F. Shughart II in the book The Taxation of Alcohol and the Control of Social Cost. In Taxing Choice: The Predatory Politics of Fiscal Discrimination.

But even earlier, in 1987, Robert D. Tollison and Robert B. Ekelund, Jr. wrote Economic effects of Geographic Restraints in the Malt Beverage Industry used by Tollison in a hearing before the Subcommittee on Antitrust, Monopolies, and Business Rights of the Committee on the Judiciary, United States Senate, One Hundredth Congress, first session on S. 567 (August 4, 1987).

And more alcohol output in this one: Temporal regulation and intertemporal substitution: The effect of banning alcohol at college football games. by William J. Boyes and Roger L. Faith

It could be a coincidence the tobacco authors suddenly en messa took such interest in alcohol ?


Petroleum industry
After the  Exxon Valdez oil spill in Alaska (1989) there was serious outrage allover the world. So the industry could use some help, and two tobacco economists stepped in : Alaskas Other Oil Spill. January 1, 1990. Foundation for Economic Education (written by Dwight R. Lee and Stephen L. Jackstadt).
No, the article is not about oil or protecting the environment. It's the same old story on taxes.
Geplaatst door jules op 20:44