Overview of previous posts here
The first part of theis blog series explored the activities of the economists network in the 1980's and early 1990's. The second part of the series illustrated the tobacco industry finally would not just attack science, but would try to change the political landscpae by exploiting people's personal beliefs.
That's where extremist free-market think tanks come to play.
THE INDEPENDENT INSTITUTE
At least 21 of the network economists have/had connections with the Independent Institute. In 1994, both core members Tollison and Wagner were among the members of the advisory board (Tollison had been on the board since 1986, the year the think tank was founded)

As a part of the 1993 Clinton health reform plan, there was a suggestion to increase the excise taxes on cigarettes from 24c per pack to 99c, the so called "monster-tax".

The industry answered with the "monster op-ed" round, by setting up PR-firm APCO, and some more activities less relevant for the this story.

There also was an 'open letter' from the Independent Institute. It is not clear who ordered the letter, but no less than 52 economists from the economists' network signed the Open Letter to President Clinton on Healthcare Reform. It won't come as a surprise the letter draws the 'taxes' card. And is quite hysterical. 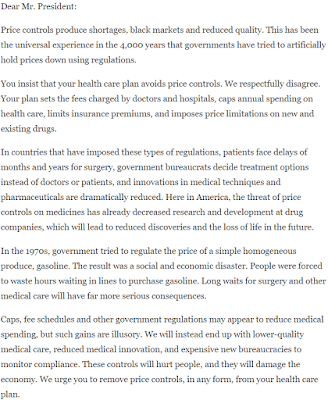 In the 1980's and early 1990's, the industry paid economist to appear at economic meetings. It seems later on the industry simply organized its own conferences with think tanks acting as a cover.

In 1995, the Independent Institute organized the conference Detaxing America to promote the forthcoming book written by William F. Shughart II

7 of the 17 invited speakers were members of Tollison's illegal social cost network. With several of the 13 other speakers (p. ex. DiLorenzo and Tullock) also being paid by the tobacco industry, but in other lobby-programs.

Books by the Independent Institute

The Independent Institute published several books and reports written by tobacco lobbyists. But even when the tobacco economists weren't the first author of a publication, they still were around.

David J. Theroux of the Independent Institute wrote a letter to Tobacco Institute

Quite a strange move for an “Independent” Institute, no ? 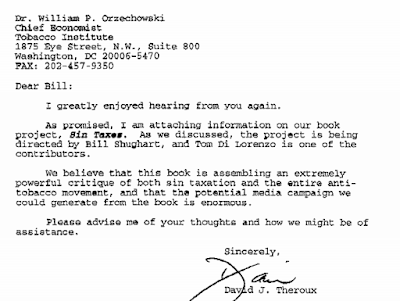 Dr. Robert Higgs was one of the people asked by the Tobacco Institute in 1996 to write op-eds against FDA-regulations[11] Shughart was one of the most active members in the network of social cost consultants.

And to promote the book:

2000: Roger Meiners and Bruce Yandle : Regulation and the Reagan Era

The foreword of this book was written by Robert Crandall, another tobacco lobbyist (and then brother in law of S. Fred Singer).

The industry also used think tankers outside the social cost network to work for them. Another Independent Institute economist, Canadian Pierre Lemieux (also involved in the pro-tobacco group FORCES) wrote the book "Smoking and Liberty: Government as a Public Health Problem"and a whole lot of smaller texts, listed on his website on a page he titled Smoking, Liberty and Health Fascism. His extremist titles and views may be a reason the industry didn't use him more often.

This document suggests there also might have been a (small) Canadian network. I did not explore it any further. The John Luik in the document was twice fired from universities for being dishonest. His former Dean stated

The Independent Institute is a fine example of tobacco interests and extremist free-market views finding and strenghtening each other, ultimately mingling into one big pseudoscientific mess benefiting the tobacco industry.
Geplaatst door jules op 03:18