Before continuing the journey through Dutch climate scepticism, it is necessary to make a little side trip outside the country. In my post on Frits Böttcher, i mentioned the existence of an astroturf group called ESEF, which is considered to be the European counterpart of another astroturf group called The Advancement of Sound Science Coalition. This seems to have been the mothership.
But as seen many times when looking at the work of the industry, several small astroturf groups were founded. One of them is the International Centre for a Scientific Ecology (ICSE) which despites it’s name had very little to do with science. Sourcewatch describes it this way :


This organisation purported to be a grassroots scientific think-tank, but it was actually a scientific lobbyshop funded by a coalition of tobacco, asbestos, oil, coal and energy interests. For this reason it is often referred to as the "Heidelberg coalition" or "Heidelberg organisation" in the literature.

ICSE was ran by Michel Salomon and was working closely with S. Fred Singer’s personal toy Science and Environmental Policy Project (or SEPP). Salomon eventually would join SEPP. Both men also were member of the advisory board of ESEF, while ESEF’s Böttcher was part of the SEPP advisory board. All over, there are very close connections between the several astroturf organisations.
The Heidelberg Appeal
Michel Salomon is the man who wrote the text of The Heidelberg Appeal as a response to the 1992 Earth Summit in Rio de Janeiro
The Appeal stated that its signers "share the objectives of the 'Earth Summit'" but advised "the authorities in charge of our planet's destiny against decisions which are supported by pseudo-scientific arguments or false and non-relevant data. ... The greatest evils which stalk our Earth are ignorance and oppression, and not Science, Technology and Industry."
The Heidelberg Appeal was signed by a lot of scientist, including many Noble Prize Winners. The text nowhere mentions climate change, but remains vague all over. Nevertheless, with some bending and twisting, the lobby was able to make it look as if it did conclude there’s no consensus on the subject.
As stated many times before on this blog, the industry understood perfectly well that when someone is already biased against something, that person does not need to be convinced by proving science to be wrong, it's sufficient to create doubt that science is right, and this nothing but another example of how they are trying to create confusion.
Remarkably, the spreading of the document mostly went via … the tobacco industry.
Tobacco industry & Heidelberg appeal
This document and this one which were made public in the Tobacco Legacy Documents library leave no doubt about the roots of the Heidelberg Appeal. I’ve mentioned before that when the science was leaving less and less doubt that second-hand tobacco smoke indeed IS harmful; the tobacco industry in the 80’ies & beginning of the 90’ies was looking for a allies to form a broader coalition to attack science. this document by tobacco industry law firm APCO provides a brilliant insight in what the industry wanted :


As we stated during our meeting in London, we believe that a TASSC-like group can succeed in Europe. European policymakers place a significant amount of importance on objective research - particularly as it relates to technical issues. TASSC, if created properly, can become a credible commentator to complement or spearhead business objections to unfair public policies and pronouncements. 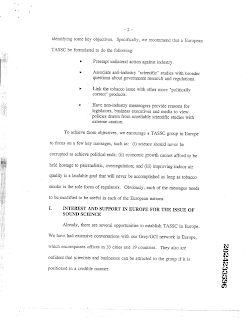 Moreover, by creating a coalition that is dedicated over the long run to speak out on issues relating to scientific integrity, TASSC can become a frequent, consistent source of information for media, conferences, etc. - in essence a "watchdog group" that wants scientific facts, not emotional reactions, to determine public policy. When considering the formation of a TASSC-like group in Europe, we think it is important to begin where we started in the United States by identifying some key objectives Specifically, we recommend that a European TASSC be formulated to do the following:
To achieve those objectives, we encourage a TASSC group in Europe to focus on a few key messages, such as: (i) science should never be corrupted to achieve political ends; (ii) economic growth cannot afford to be held hostage to paternalistic, overregulation; and (iii) improving indoor air quality is a laudable goal that will never be accomplished as long as tobacco smoke is the sole focus of regulators. Obviously, each of the messages needs to be modified to be useful in each of the European nations.

INTEREST AND SUPPORT IN EUROPE FOR THE ISSUE OF SOUND SCIENCE
Already, there are several opportunities to establish TASSC in Europe. We have had extensive conversations with our Grey/GCI network in Europe, which encompasses offices in 33 cities and 19 countries. They also are confident that scientists and businesses can be attracted to the group if it is positioned in a credible manner

As a starting point, we can identify key issues requiring sound scientific research and scientists that may have an interest in them. Some issues our European colleagues suggest include:
In each of these issues, there has been considerable discussion as to whether sound science is being used as a basis for these decisions. The diversity of these issues, and their tremendous impact upon business and industry, provides an excellent "tie-in" to the work TASSC is currently undertaking in the United States.

The document leaves no doubt : global warming scepticism was nothing but one of the many issues the tobacco industry hoped to use in a broad attack on science. It also explains why so many leading climate sceptics (Singer, Milloy, …) have their toots in the tobacco industry. The effort to create a European branch of TASSC finally would result in the ESEF organisation of Frits Böttcher. It is in this circle of lobby groups the Heidelberg Appeal has its roots.
In 1993 in Holland an organisation was found called Foundation Heidelberg Appeal Netherlands (HAN), and which would quickly work together with Böttchers Global Institute. HAN would later on become one of the organisations to form De Groene Rekenkamer, therefore i’m going to spent some more time on them in another post.
Geplaatst door jules op 00:56