Purely coïncidental, two days after i was blogging about Rob Kouffeld, De Groene Rekenkamer on it's Klimatospoof website posted a video message from this very same man who, to refresh the minds, is the president of the Dutch Foundation Nuclear Energy.

The video is in Dutch, but i'll summarize below what Kouffeld has to say and show it's nothing but a bunch of red herrings and low brow misconceptions..

CO2 isn't the most important greenhouse gas
Kouffeld's arguments are old news and have been debunked so many times it is incredible people still use them. Kouffeld isn't really delivering new insights :
CO2 is considered to be the most important greenhouse gas (GHG). This is incorrect, water vapor is.
Kouffeld immediately starts his video with a strawman argument : scientists don't consider CO2 to be the most important GHG as they are very well aware that water vapor accounts for most of the temperature rise due to GHG's. In the light of the present discussion, this is rather irelevant though as by no means it implies CO2 is not a GHG.

After the invalid water vapor argument, Kouffeld continues to try to marginalise the role of anthropogenic CO2 even further by saying that methane is a GHG too. 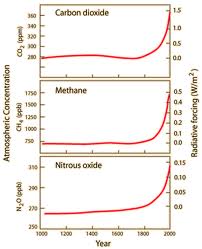 And he finishes by saying that the role of CO2 is minor, and from that CO2, only a limited part is antropogenic as volcanoes and forrest fires are emitting CO2 in the atmosphere too.
As most people know, of course it is true that methane is a GHG too. But Kouffeld fails to mention that in the previous century mankind caused the levels of methane to increase sharply...
The second part of his argument also isn't telling the complete story : while indeed there's natural CO2 in the air (duh), it isn't so that mankind did not alter the concentrations significantly : in pre-industrial time, CO2-levels were around 280 ppm.

At present they are around 390 ppm, and predictions say levels could rise to 600, 700 ppm or more. In other words : it is very well possible mankind will double the levels of CO2 in the atmosphere. That is significant.

Emission of CO2 from volcanoes is less than 1% of what man pumps in the air annualy.
Temperatures aren't rising
Next, Kouffeld jumps on the train of using short time natural varation in temperature trends to claim that while CO2 levels are rising, temperature isn't always following. Hence there's no 1:1 relation between CO2 and temperature.
The argument once again is a clear strawman : CO2 is not the only factor with an influence on climate, so naturally one simply does not expect to find a 1:1 relation. Antropogenic climate change comes on top of natural variation.
Kouffeld then continues using the well known claim 'the last ten years, earth hasn't been warming' which Coby Beck adresses here and is a clear cherry-pick as the period to be compared has been carefully selected to fit the conclusion.


Glaciers are meaningless
Kouffeld continues by saying glaciers were melting before man was emitting GHG's, but doens't mention earth was coming out of a little ice-age. And he correctly says the length of a glacier is an equilibrum that doesn't depend solemnly on temperature, but also on precipiation, and claims therefore it is possible to say if glaciers are melting due to a rise in temperature.

In other words, Kouffeld fails to notice we both have thermometers and snow gages, two devices which make it impossible to verify which of the two factors is dominant (temperature for the vast majority of the glaciers).


It's anything but man 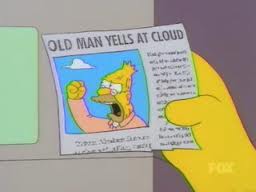 He then continues by adressing the Svensmark cloud theory, which scientist never considered to be proven. Realclimate adresses Svensmark latest publication in their post : still not convincing.

Not very convincing either is his argument the present low activity of the sun is the cause of the present (cherry-picked) cooling period.

He ends his talk by mentioning Al Gore a couple of times. Which obliges me to say Cheers !


Did i mention Rob Kouffeld is part of the "scientific" advisory board of the climate skeptical group De Groene Rekenkamer ?


UPDATE : a reader mailed me Kouffeld is member of the International Climate Science Coalition. A group which received quite some attention lately because of its strong ties with the authors (McLean, de Freitas & Carter) of one of the most deeply flawed papers which appeared in a mighty long time.

Deepclimate has a nice post covering the biggest problems with the McLean, de Freitas & Carter paper and a follow up post which links the New Zealand division of the ICSC with a ... libertarian political party called ACT.
Geplaatst door jules op 14:08