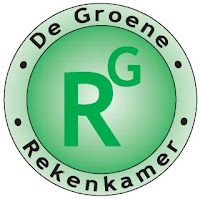 The next organisation which deserves some more attention is The Green Court of Audit or in Dutch : De Groene Rekenkamer (DGR).

As we will see, this is the organisation where different kinds of environmental skeptics (not just in the field of climate change) come together. Clearly, as will be explained later on, DGR is an organisation with a clear political focus.

De Algemene Rekenkamer is the Dutch court of auditors which on its website summarizes its task as follows : The Court of Audit checks that the government spends public funds and conducts policy as intended.

Of course it's this Auditing institute which inspired the name Groene Rekenkamer. Clearly, just from the name itself, one can already see what kind of organisation DGR will be. The organisation was found in 2008 by scientists and journalists and in the statutes DGR describes the aim they were formed as follows (§2) :

The aim of DGR is to critically look at the governmental policy on environment, health, technology & related areas and to encourage scientific analysis of risks, cost-effectiveness of the policy and to spread knowledge to a broader audience.

As a little sidenote i can't resist mentioning that, regarding what's to follow, i was surprised to see that under revenues the very first source the organisation sees is "subsidy". I was amused :-)

Before the official start of DGR in 2008, there already was a coöporation between the different groups which ultimately would join DGR, something MeerVrijheid's Theo Richel (as far as i understand, he became an employee of DGR) was already asking for in 2005 on the website libertarian.nl (sic). The groups which ultimately would form De Groene Rekenkamer are :
For a better understanding of what DGR is about, it is useful to have a closer look at the organisations behind DGR. Which will be the topic of the next couple of blogposts.
Geplaatst door jules op 23:04