The economists were paid if they sent their op-eds to their local congressmen and Senators.

In 1989, these faculty contacted their local politicians, sending them their op-ed 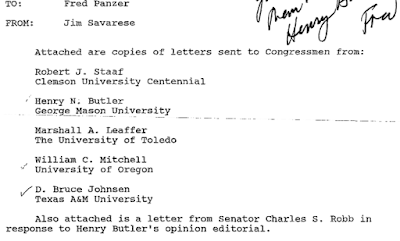 Several of these are not economists, but professors of law. As we will see in another blogpost, the industry also tried setting up a lawyers network.

The economists and lawyers did not exactly say they were paid by the Tobacco Institute, As an example, Ronald X. Groeber wrote

The full list of letters discovered can be found in the appendix which will be published with the last blogpost in the series
Geplaatst door jules op 00:28