Media tours were not the only way Smoking and the State: Social costs, rent seeking, and public policy was promoted, the industry also wanted favorable book reviews. So once again the network economists began writing. James Savarese wrote

The economists did what they were asked 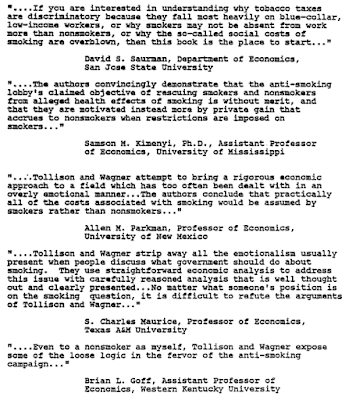 
Of course, the economists' work first was checked for the right wording. The phrase "Most would sanction the government warning tobacco users of the health consequences of their habit" in Cecil Bohanon's review did not please the industry, so they added a word

A similar edit was made in the draft written by Ryan C. Amacher. Notice the similarity in handwriting. These edits were made by the Tobacco Institute. The edits appeared in Amacher's final version, published in The State, Columbia, S .C., Sunday, August 14, 1988 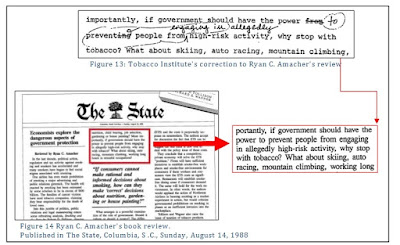 Adding a word sometimes was not enough

The same document also shows the Tobacco Institute's lawyers had to review the paper before it could be sent to the newspapers. Not all reviews were published though

Seventeen economists were asked to write a review. Assuming everyone writing a review got paid, every economist earned around $3.500 for writing a review. Calculated otherwise, the industry paid some $2.000 per page written.
TI president Samuel D. Chilcote reported to the members of the TI executive committee