Even though the network was not complete yet, in a first campaign in 1985 the economists produced 34 op-eds, 18 being published, earning the authors $1.000 each

The same year the Tobacco Institute launched the Packwood excise tax plan op-ed round. Most economists forwardedtheir op-eds to their local Senator 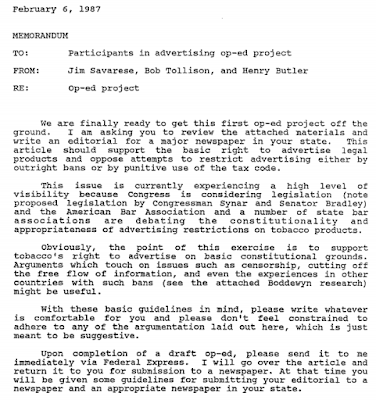 The memorandum shows that:

Although Savarese calls the 1987 op-ed round the first one, clearly there were already campaigns in 1985 and 1986, and in 1985 the industry already had a list of economists willing to appear at hearings.

In 1988 there was the National Economic Commission op-edround and another one dealing with a possible advertisement ban on tobacco. Savarese once again made sure the economists and lawyers knew what they had to write. After some examples of arguments, Savarese concludes with a remark showing something interesting: Anna Tollison, wife of Robert, was involved in the whole operation

Robert J. Staaf received a letter from dr. John W. Richards, Jr. complaining that his op-ed was not very scientific. Of course the letter of complaint was forwarded to the Tobacco Institute 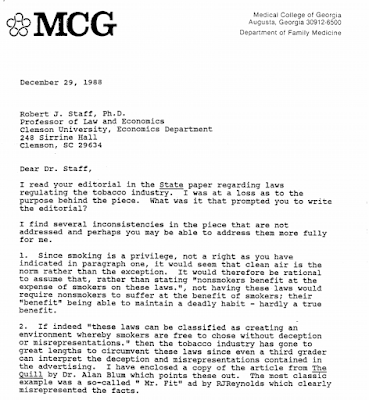 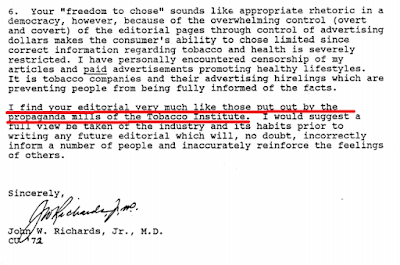 The LTDL does not contain the answer to Richards even though a letter from Savarese shows Staaf must have replied.

In 1989, another round was set up. Only 20 network economists were contacted. The newspapers to be targeted were listed too. Not the major national ones, but the smaller local newspapers, the ones with less sophisticated editorial boards. At least 14 of the 20 op-eds got published 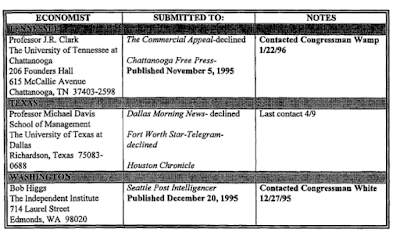 It is not clear that there was a full op-ed round in 1992, but Tollison and Wagner did send an op-ed to a local newspaper, titled scientific integrity consumed by anti-smokingzealotry. Not exactly the kind of title used in genuine academic literature.

Early 1993 EPA released a report stating second hand smoking indeed kills. The Clinton administration was thinking of drastically raising excise taxes (aka the monster tax). The industry answered (among other things) with a new op-ed campaign: 20 economists would be asked to write op-eds, so once again the industry did not use the entire network. If the op-ed got published, the economist each would receive $3.000. And again, the industry did closely follow up whichop-eds were (about to get) published: 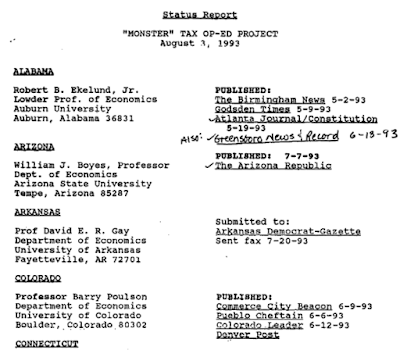 In the end of 1995, the economists held another op-ed campaign, this time aimed at the American Food and Drug Administration (FDA) as the administration wanted further regulations on tobacco products. At least 15 op-eds were published.
In 1988 there would be a last (?) op-ed round, but by then the LTDL shows major hiatuses, and the documents often do not any more carry names, making it harder to be sure who was involved.

Again, it is not clear why the industry usually picked only around 20 economists for these campaigns. Perhaps some states at the time were not considered a priority.

While superficially it may seem the op-eds were expensive, the industry wrote a memorandum about an op-ed written by Robert Tollison, showing the industry thought they were a bargain