A memorandum written by Tobacco Institute's Fred Panzer explains why the industry launched severalop-ed campaigns.  This memo strongly implies the op-eds were not written whenever the economists felt like writing something.

The campaigns were given different names like Phase II (also involving some "scientific papers").  In 1993 there was the monster op-ed campaign, etc...

The LTDL shows the industry paid a small bonus (900US$ for an Op-ed, only 125 US$ extra for forwarding it) to the economists sent an Op-Ed to their local politician, not just to a newspaper.  The industry specified the recipients. In states where the industry 'owned' more than one economist, they were given different politicians to contact. Panzer wrote

The free-market economists were supposed to write something against excise-taxes, but were not completely free to write anything. The industry dictated that they  had to mention

The last bullet refers to the argument "They are simply modern versions of the onerous British taxes which America's founders fought against". That is pure emo-argumentation.

Of course, op-eds had to be cleared by the Tobacco Institute's lawyers

As mentioned before, (at least the 1985) op-eds were also corrected by the PR-firm Ogilvy and Mather before the economists were allowed to send them to newspapers.

Nevertheless, even though the network members weren't free to write what they wanted, the Tobacco Institute did not erase every passage it didn't like. Again, this had a purpose 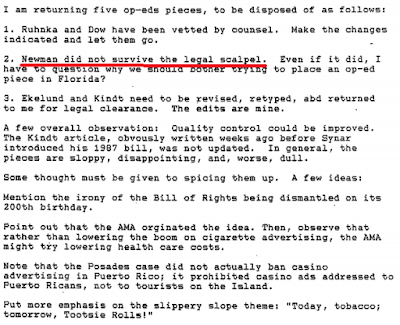 Again, as with the testimony, the output of the economists was closely monitored by the Tobacco Institute 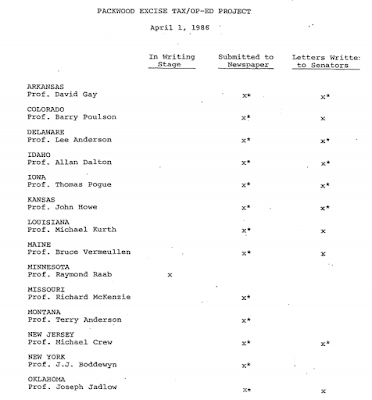 The economists must have known it was bit strange they would receive more money if they would write their senator, once again disproving the thought they might have been useful idiots. Not all economists sent a copy of their op-eds to their Senator. Why not all of them tried to earn the extra cash is open to speculation.
Geplaatst door jules op 12:52