Belgian climate pseudo skeptics address ten issues, score zero goals. Or how to disagree with yourself !

The article starts with complaining they don’t get the attention they want in the very biased media.
There are lot of internetsites full of climate skepticism, but in the scientific press this skepticism evaporates: 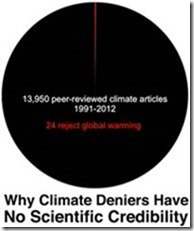 Research has shown there is a strong misrepresentation in the media. But not in the way the gang of four claims, contrary: pseudo skeptics receive much more media-attention than they deserve !

If they want more media attention, there’s a solution: maybe they might start with … contributing to this scientific topic. Giving a presentation is not enough to do science. Especially when the presentation is very substandard

Their GWPF-article continues with ten points of which they claim they rebut climate science. This is not true, and actually the ten points are often the opposite of what the very same people said elsewhere. yes you read it right: they themselves have rebutted several of the ten points of 'evidence' they present.


1. The climate has always changed. This was true during ancient times and it has also been true since the beginning of the modern era. These climate changes have always been, and still are, independent of the concentration of CO2 in the atmosphere;

A rather strange point if you ask me, as nobody claims it never changed. And an incorrect one. There are several reasons why climate can change (Milankovic cycles p.ex.), but CO2 always has been one of the components influencing earth's temperature. Of course it has, physical laws have been the same back then as.

The Vostok ice-cores clearly show that, contrary to what they write, in the past there *has* been a correlation between CO2 and temperature.

Actually, in the same text, they do refer to this Vostok-core. So they are aware themselves there's a correlation between CO2 and earth's climate. So their 10 points aren't very consistent...

In English: ”CO2 is considered to be one of the main causes of the greenhouse effect and it's absolute necessary to reduce the atmospheric concentrations of CO2".

In other words: Marko himself disagrees with the GWPF-text he signed.

2. During Roman times and the Middle Ages temperatures were observed well in excess of those currently experienced. From the 16th till the 19th century a cold period referred to as the “Little Ice Age” predominated. All these changes took place without mankind being held responsible. We believe that the increase in temperatures that occurred during a certain part of the 20th century is the result of a recovery from this cold period. These various events can be explained by a combination of warm and cold cycles of different magnitudes and duration. Why and how this happens is not yet fully understood, but some plausible explanations can be put forward;

This a non sequitur. A non-influence in the past, doesn't automatically mean present day climate cannot be influenced by mankind.

A nice analogy is the forest-fire one: even though this kind of fires occurs naturally, this does not imply a pyromaniac cannot burn down a forest.

Earth's atmosphere contained no free oxygen during the first billion years or so. Free oxygen only emerged in the atmosphere as a *result* of ....life on earth ! That's how dramatic the influence of life can be on our planet's atmosphere.

If we look at the anthropogenic impact on the atmosphere, we see that, just like other species have done before, we are altering earth's atmosphere:


The graph clearly demonstrates man *significantly* altered the concentration of several greenhouse gasses in the atmosphere.

3. The so-called “abnormally rapid” increase in global temperatures between 1980 and 2000 is not unusual at all. There have in fact been several such periods in the past, during which temperatures rose in a similar manner and at comparable rates, even though fossil fuels were not yet in use;

A non sequitur similar as the one above. The pyrmonaniac still burned down the forest.

4. Temperature measurements do not necessarily correlate with a building up or a decrease in heat since heat variations are energy changes subject to thermal inertia. Apart from heat many other parameters have an influence on temperature. Moreover the measurement of temperatures is subject to numerous large errors. When the magnitude and plurality of these measurement errors are taken into account, the reported increase in temperatures is no longer statistically significant;

Oddy Alain Préat stated the following in this presentation (p. 37):

Again, one of the authors disagrees with what's written in the GWPF-article....

5. The famous “Hockey-stick” curve, known as the Mann’s curve and presented six times by the IPCC in its penultimate report, is the result among other things of a mistake in the statistical calculations and an incorrect choice of temperature indicators, i.e. proxies. This lack of scientific rigour has totally discredited the curve and it was withdrawn, without any explanation, from subsequent IPCC reports;

There have been several temperature reconstructions since the original MBH99 paper, demonstrating the original paper, even though there were some statistical flaws, wasn't all that bad.
Do notice the conspiracy theory they launch between the lines stating 'withdrawn, without any explanation'.

Scientific knowledge increases, and it's just normal new reports look at the newest scientific body of evidence. This is the way it should.

On top of that, the statement is completely false, the AR4 clearly and explicitly discusses the problems with MBH99. On top of that the graph is still there. So apparently, none of the four authors actually read the IPCC report they are criticizing ?

Do have a look at the graph presented in the AR4. Are you able to spot the MBH99 one without looking at the legend ?

6. Even though they look formidably complex, the theoretical models employed by the climate modellers are simplified to the extreme. In fact there are far too many (known and unknown) parameters that influence climate change. At the moment it is impossible to take them all into account. The climate system is extremely complex, containing not only chaotic components but also numerous positive and negative feedback loops operating according to various different time scales. Which is why the IPCC wrote in its reports that: “…long-term prediction of future climate states is not possible” (page 774, Third report). This is very true. To this day all the climate predictions based upon these models have turned out to be totally incorrect. Strangely, nobody seems to care;

They seem to be a bit confused here: the quote they use clearly says "climate states". And while yes this increases uncertainty (hey, no one ever said climate models are perfect) as there are feedback processes, this does not mean as they want to try to suggest, that it is impossible to make any predictions of the future.

Saying climate predictions based on models are totally incorrect is a false statement, as this skeptical science post demonstrates:


The AR4 comes to this conclusion on the reliability of climate models:
"In summary, confidence in models comes from their physical basis, and their skill in representing observed climate and past climate changes. Models have proven to be extremely important tools for simulating and understanding climate, and there is considerable confidence that they are able to provide credible quantitative estimates of future climate change, particularly at larger scales. Models continue to have significant limitations, such as in their representation of clouds, which lead to uncertainties in the magnitude and timing, as well as regional details, of predicted climate change. Nevertheless, over several decades of model development, they have consistently provided a robust and unambiguous picture of significant climate warming in response to increasing greenhouse gases."


7. The relationship between CO2 and temperature, obtained from the Vostok ice cores, shows that a building up of CO2 occurs 800 to 1000 years after an increase in temperature is observed. Hence the increase in the concentration of CO2 is a consequence of the warming of the climate, not its cause;

Ah, another non sequitur. And one that is perfectly explained here


8. But the coup de grâce to the “warmists’ theory” – certainly not yet visible in the French and Belgian media – comes from the observation that for the past fifteen years or so the global temperature of the Earth has remained constant. During the same period CO2 emissions have increased by far more than in the past, reaching an unparalleled record this year. Honest climate scientists admit that this observation is an embarrassing inconvenience for their theory. However, attempts to make us believe that the Earth is continuing to warm up persist. Will we have to wait for another twenty, twenty-five or thirty years for the global warming advocates to finally admit that there is no unambiguous correlation between the global temperature of the Earth and human-generated CO2 emissions?

There's a lot of noise on a temperature, that's why you cannot use short terms to say *anything* about climate.

The WMO defines climate as the weather averaged over a 30 year period. Not shorter.
Alain Préat is aware of this: "Le climat est défini comme l’état moyen, sur une période d’au moins 30 ans" so it's a mystery why he is using a time period he knows to be too short.

On short time intervals other factors can mask the influence of the rise due to CO2. Especially the ENSO-phenomena, having a large influence on the distribution of the heat content between surface and
ocean.

The four authors do acknowledge there are several components influencing temperatures in their 4th point, so they should be aware it's not very useful to talk about the influence of CO2 on such a short time scale. So in my opinion, again, they are not being very consistent.

The ENSO index is shown in the image below


When we look at both surface and ocean, it's clear there's no pause in the warming of the earth.


9. The claim that Hurricane Sandy is due to human CO2 emissions is totally unfounded and has been vigorously contested by numerous meteorologists. This regrettable distortion of the facts has been denounced in an open letter, addressed to the General Secretary of the UN and signed by more than 130 world-renowned scientists, including one of the present authors;

It's impossible to attribute a single extreme weather event to climate change. So attributing Sandy to global warming is nonsense.

Nevertheless predictions are there will be more severe storms, so more storms *like* Sandy.


10. Finally the “abnormal” melting of the Arctic Sea ice, that made the headlines of numerous journals during this summer, was also observed during previous decades. Amazingly the record high increase in Antarctic Sea ice that occurred at exactly the same time has been completely ignored by the very same media. Moreover, no mention has been made of the current, particularly rapid, regeneration of the Arctic Sea ice.

I'm not really which rapid regeneration of arctic sea ice they are talking: here are the arctic ice extents, as presented (p. 39) by ... Alain Préat István Markó


I'm really not sure what rapid regeneration they are talking about... Once again, one of the four authors is debunking the GWPF-article. Unless they mean ice is growing in winter. Of course it is.

My conclusion is that the ten points they raise do not rebut climate science at all. And remarkably they often are in conflict with what the authors themselves said elsewhere. Implying there’s an odd and strong inconsistency in the entire article they’ve written for the GWPF.

kudos to Sylvain for helping me with some of the references.