While the leading politicians grow older and older, it's time for a younger generation to stand up and take over from the present generation. One of the young people walking the trail towards national politics is 23-year old Vincent De Roeck, A Belgian liberal with libertarian influences who is involved in several political groups around the liberal party VLD.

De Roeck is president of the think thank Nova Libertas; vice-president of the LVSV (a student organisation of Flemish liberals, where several liberal ministers started their career). For at the moment he's still unknown to the general public, it might be a good idea to have a look at who is. On his personal website he introduces himself as follows:


I'm a student (law & political sciences) and for years have been publishing and been engaged in politics in Flanders and abroad. As a young dynamic force I’ve put my shoulders below many successful projects. Above that, i’m definitely not an intellectual nobody. Not without a reason in 2007 the well respected American magazine National Review called me a ‘prominent intellectual’ for my razorsharp analysis of Belgian politics and of the negative impact of the actions taken by the central banks during the credit crunch.

Clearly De Roeck is someone who will have interesting thoughts to share, and on the weblog In Flanders Fields (a central meeting blog for a lot of liberal visions) he gave his opinion on the subject of climate change. A subject on his website he calls a hoax:

For a while already, climate has become an important issue in the media and thereby also in politics. With Al Gore winning the Noble Prize and an Oscar for his pseudo-scientific documentary 'An Inconvenient Truth' the eco-militants have won a battle. Suddenly, documentaries on the miserable life of the Indian children living on the streets are considered to be no more valuable than a computer simulation about the weather. Suddenly, the international achievements of world leaders like Mahatma Gandhi, Nelson Mandela & Kofi Annan are placed on the same level as the capers of a failed politician who's no more than a demagogue without scientific support.

Because of the orchestrated media-hype & mindless group-behavior of the doomsday-prophets in our media, nobody doubts the accuracy or correctness of "global warming". Nobody asks real questions any more. Some interesting op-ed's and critical thoughts on this climate-hype can be found here
[I’ve cut the other two links on his site because they are dead. Here is a starting point for more info on Lomborg]
I rarely write on the subject of climate change. Not because i wouldn' know anything about the subject; in contrast to most climate-prophets i actually took some biology classes; but simply because i don't care.
[According to his website, De Roeck is a master student in law. Seems he's refering to his biology class in high school ?]

Frankly i don't care what happens to this planet. I'm terribly annoyed when seeing the behavior of scientists and politicians who crave for media attention. Nobody seems to care what the content of the message is as long as the message itself, no matter how wrong it is, is hailed with cheering and applause. It looks like an abundance of knowledge is not what scientists or politicians suffer from, but this fact doesn't bother opinion-makers at all.

Everybody talks about “global warming” while it is a scientific fact that Europe will suffer “global cooling” just because the first fundamental change in climate will be the halt of the North Atlantic Oscillation (NOA) [actually, IPCC considers such a halt to be “very unlikely” and it's definetely not the first change that will happen] whereas this NAO is what keeps Europe’s temperatures high. New York is on the same latitude as Madrid but during winter it has plenty of snow and a harbor that freezes over.

Another piece of scientific nonsense is the human nature of climate change. Scientific research revealed man is responsible for no more than 5% of the emission of Greenhouse and other gasses that harm our environment. Those same scientists say 5% is a neglectable number.
[De Roeck misses the point the rise accumulates, p.ex for CO2 from 280 ppm to 390 nowasdays, much more than 5% that is.]

The Brussels based Ludwig von Mises Institute Europe, in which I’ve been active for a while, follows the vision of the American Cato institute [a libertarian thinkthank, considered one of the better known astroturf groups. Because of Cato's obvious far from centre position, De Roeck should be aware an exxon funded thinkthank maybe isn't the best possible source for gathering objective information J.], which is very critical towards the attempts of eco-fascists to use the media for spreading its lies towards to the general public in an attempt to force taking actions against the emission of GHG’s, even though there’s no scientific reason to do so. Annette Godart, president of LVMI-Europe, wrote an analyses entitled “Climate change: a hot item that requires cold" in which she writes :


At the moment, climate change is one of the most discussed topics in the world. It seems, that even on Mars the Southern icecap is in danger and that Neptune appears to be warming too. [i've already adressed the 'argument' that other planets are warming too]

It is a very serious question, no doubt, and the safest way to discuss this, is to let it be examined by the capable scientists. But the problem is the fact, that a lot of emotions and opinions are blurring the outcome. It should not be the first occupation of politicians, but it is. I have only one question and I discovered, that people pay more and more attention to that fact.

Between 1350 and 1700 there was a period, called “the Little Ice-Age”. That is a common fact. (Though in the 20th century there was a period of cooling too). Josef Reichholf, biologist and director of the zoological State collection has written an article about the topic. In the article “Wärme tut gut” [translated : "heat does well" J.], he explains, that the climate change came quite suddenly, so suddenly, that the people were thinking of a punishment from God. The high tides were stronger in that period than those we ever knew in the 20th century. Storms were so strong, that they shaped the islands and Halligen between the Netherlands and Denmark. Temperatures could be measured at that period and dropped under minus 25 degree Celsius. People froze to death in their homes. Glaciers were growing longer, wolves came from the North etc.

In the Middle Ages on the contrary, the climate was so warm, that figs were growing in Cologne, Germany, and wine was produced in Bavaria, England, Belgium and the southern part of the Netherlands. Then, in 1700, that period of the “Little Ice-Age” stopped. The circumstances were not different from the period in 1350: no airplanes, no industry, no cars, no central heating and no pollution. There is research going on concerning this phenomenon. The Max Planck Institute of Darmstadt showed, that for example the sun was presently at an 8000 year solar max, which might explain the global warming. [yes, the same old "it's the sun stupid !" meme]

By looking back in history, this piece of text shows us that causality between human factors and the environment are much less convincing than generally presumed in the media.
of course, this conclusion cannot be made from that piece of text. One needs to look at all factors influencing climate

From an Oscar-comittee I can understand it doesn’t pay too much attention to scientific truth because movies more often aren't depicting reality, but for a Noble Comittee there exist no excuses. A scientific institute that literally insults all previous nominees and mocks their achievements by giving Al Gore the Noble Prize, a cheating failure without any scientific grounds to stand on, and without any social surplus. This is a nice demonstration of the devaluation of the Noble Prize


I am a bit surprised by the high level of hybris in this post as De Roeck seems to very confident in calling a subject he doesn't know anything about 'unscientific'. Above that, De Roeck clearly fails to make distinction between Al Gore and climate science, even though those two clearly are separated subjects.

I hope Vincent De Roeck will make the effort to have a closer look at the scientific reality instead of copying faulty skeptical arguments the astroturf groups fabricate to misguide the public; and that he'll learn to be just as critical towards a source when the presented material says just what the personal bias wants to hear : rejecting science but using the thoughts of a polical thinkthanks instead, common Vincent, do you seriously wanna do that !? Reversed, it would mean basing your 'scientific' vision on reports produced by Greenpeace & Friends Of TheEarth kind of groups... The chance the info presented is going to be one-sided is high.

Yet as I know today Vincent is still a young puppy, i don't want to be too harsh : yes, young Vincent has a lot to learn on the use of sources, but i'm confident he will adopt this knowledge and in future will not just excel in biology, but will know his climate change just as well as he knows his goat. 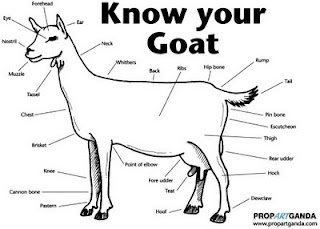